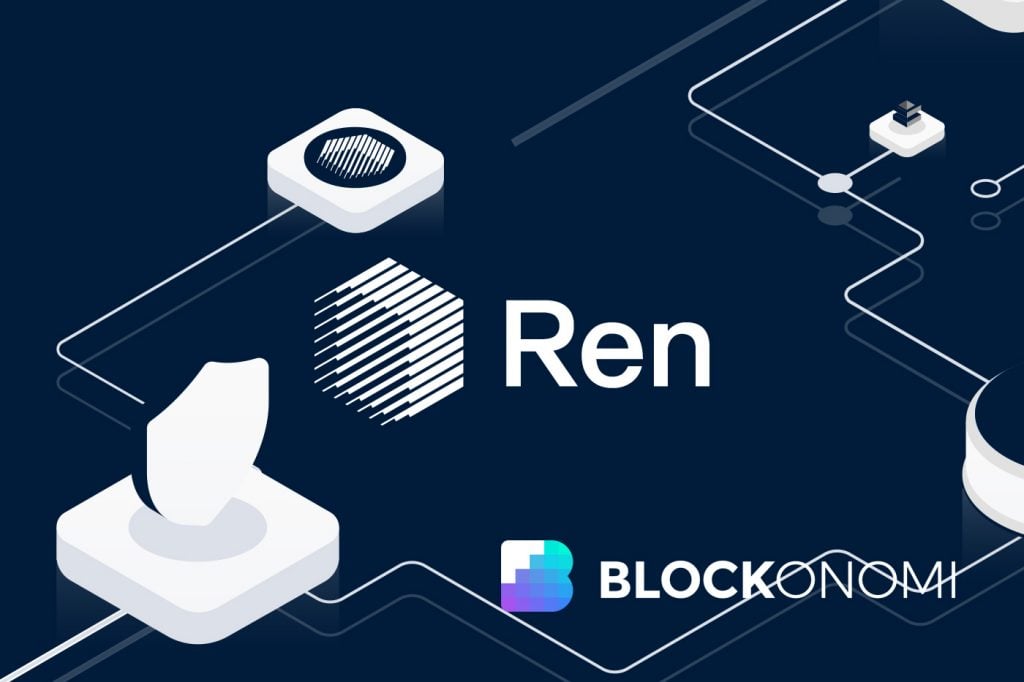 The concept of interoperability of blockchain networks has been likened to overcoming the standardized communication barrier that faced the early iteration of the Internet.

Lauded as the solution that can provide more scalability, liquidity, and access to decentralized applications (dapps), interoperability is taking several molds in the broader cryptocurrency space.

Promising interoperable frameworks, like Cosmos, are already live, where blockchains can be spun up within the broader Tendermint consensus engine of the network.

However, there are limitations in the current design of such models, namely that they are ecosystems of standardized communication, but it remains challenging to translate that universal communication pattern to other ecosystems — for example, the construction of the Cosmos bridge to Ethereum.

In that light, more boutique, blockchain-agnostic solutions are also proliferating. For example, atomic swaps, the trust-minimized transfer of assets, have made significant headway in the last year, and are materializing beyond native networks swaps (i.e., Kyber and ERC-20 transfers) to cross-blockchain capabilities.

Ren Project is one of those initiatives that is helping shape the narrative of DeFi, particularly at the convergence of interoperability and privacy, where “liquidity unchained” is the ultimate goal.

The Need for Interoperability in DeFi

It is an axiom that liquidity begets liquidity, and the stated goals of many emergent projects in the crypto space (e.g., FTX) are honing in on building better liquidity across crypto markets. Outside of stitching together infrastructure that can tap into the patchwork of exchanges, interoperability can function as a critical tool for providing better liquidity to users and a more standardized interface.

For example, in the context of Bitcoin, fascinating projects like TradeLayer build native DEXs on Bitcoin and Litecoin, where the platform’s decentralized swap model can even enable on-chain leverage. 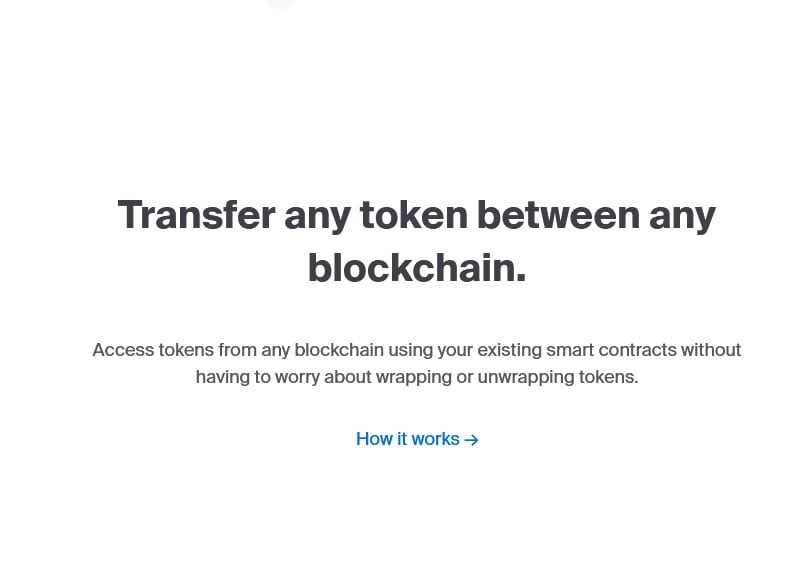 Better interoperability also has promising implications on liquidity in the form of more accessible interfaces for users. According to Ren Project:

“Without interoperability, it is impossible to connect different blockchains together in a way that their decentralized applications can benefit from each other’s liquidity and provide a simple and complete experience for their users.”

More intuitive user experiences will lead to reduced barriers to access crypto DeFi products, fostering more interest in the ecosystem, and consequently, bringing more liquidity in tow. The ideal end is a fluid system of interconnected, open protocols that can supplement highly liquid markets, ranging from derivatives to spot exchanges, across blockchains.

At the core of interoperability is the potential of open protocols, and with them, the incorporation of some intriguing cryptographic advances — such as secure multi-party computation (sMPC).

At a high level, Ren Project is analogous to a public blockchain network, underscored by nodes running clients, BFT consensus (it uses a modified version of Tendermint), and a virtual machine — RenVM. However, Ren focuses heavily on privacy and a blockchain-agnostic interoperability scheme to support financial applications.

“Trustless privacy and interoperability are absolutely necessary for achieving truly decentralized applications that are secure, usable, and liquid,” details the Ren documentation. “Dark pools, DEXs, leverage, lending, collateralization, transferring digital assets, and many other use cases are now made private, interoperable, and practical through RenVM.”

Ren approaches this with an interesting take that functions as an improvement over the implicit trust requirements in technologies like federated two-way peg sidechains and explicit protocol implementations (e.g., Cosmos & Polkadot).

In Ren, blockchains are supported that don’t require the integration of the required protocol messages in inter blockchain frameworks like Cosmos — where the IBC is the standardized messaging protocol.

How? It deploys a proprietary implementation of sMPC, a bleeding-edge cryptographic technique with some fascinating long-term consequences in crypto. 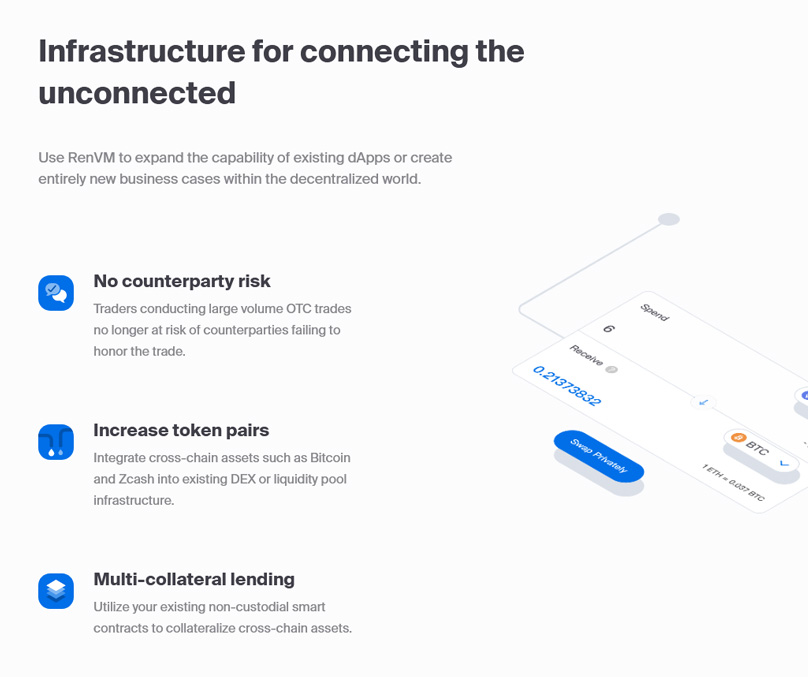 “Interoperability is achieved by generating a secret private key,” details the Ren documentation. “This secret private key is used to sign events and transactions on different blockchains so that RenVM can prove events have been validated by its decentralized network of thousands of Darknodes.”

The result is twofold: enhanced privacy and interoperability, which breeds liquidity. Inputs, outputs, and states of computation are never revealed, and sMPC concurrently empowers Ren to bypass the need for intermediary assets such as Wrapped Bitcoin, which are an additional layer of friction in the user experience.

The most appealing part for entities looking to expand liquidity is that the solution essentially functions as a plug-in. 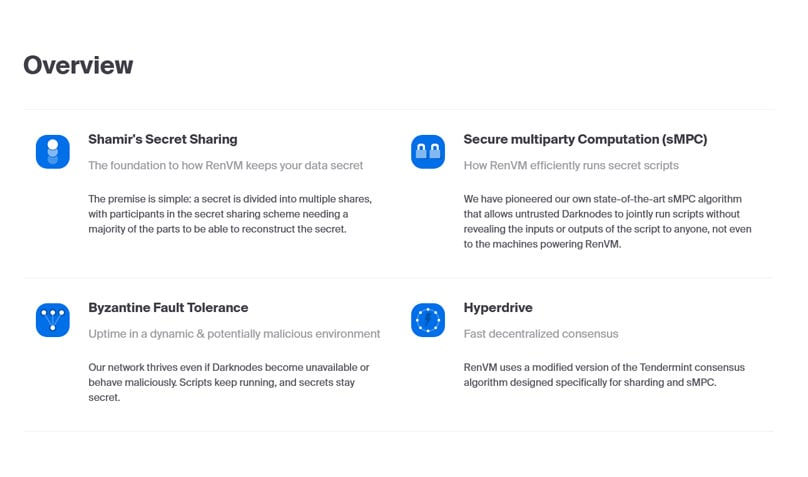 For example, Ren’s uniswap project enables shifted ERC-20 token integrations, ostensibly a method for Ethereum DEX’s to support other cryptocurrencies, like Bitcoin or ZCash, without modification or intermediary “wrapping” and “unwrapping” phases. And their stated goals are targeting a seamless experience for users, abstracting away the underlying complexity so that users are not presented with a daunting task of switching between two different blockchain interfaces.

“Users do not need to use special wallets or special transactions. For example, users trading Bitcoin on an Ethereum DEX would never need to do anything other than transfer Bitcoin on the Bitcoin blockchain itself.”

The trend towards DeFi in crypto is largely predicated on the concept of open, accessible, and “trustless” execution of financial applications and transactions.

While there remain many hurdles, such as the unrealistic concept for over-collateralized lending to developing populations, the implications of interoperability should serve as a spark that fuels the development of better liquidity in the ecosystem.

Institutions have yet to really enter crypto, which is not surprising considering the immaturity of market infrastructure, lack of definitive regulation, and only early-stage derivatives instruments available. When liquidity is the goal, all of those factors diminish the capacity to improve liquidity.

However, interoperability provides a thread that may serve as the medium connecting the patchwork of markets and blockchains together, and eventually, materializing into the type of technical standard that broaches regulatory decisiveness and broader adoption of open financial products by the mainstream.