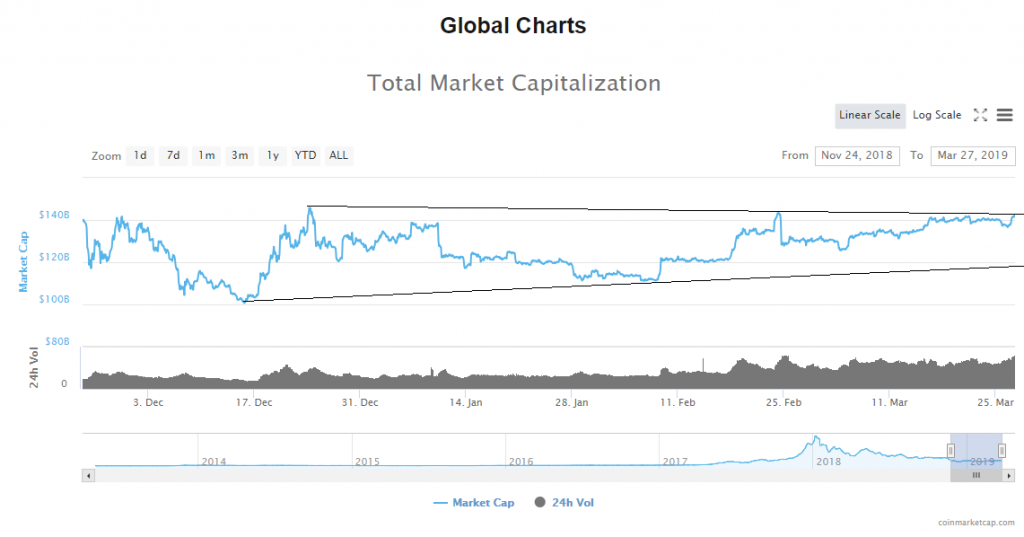 Since the start of the day, the evaluation of the cryptocurrency market cap has been on the rise and has come up from around $138B at today’s open to around $142,561,000,000 at its highest point today.

On the global chart, we can see that the evaluation came up to the resistance levels of the current range formed by the corrective movement we have seen from 15th of December and it serves as a strong resistance point.

The wave structure looks similar to the one after the first five-wave increase ended on 24th of December which is why I believe that after this increase retests the mentioned resistance line we are to see the start of an impulsive decrease to the downside like we did back then.

The market is mostly in green with an average percentage of change ranging around 3.4% in the last 24 hours. The biggest gainers are around 11% like EOS and Cardano out of the major once, while some of the minor altcoins have been increasing more with REPO being the biggest gainer today with an increase of over 59%.

Bitcoin’s market dominance has been decreasing and has come down to 50.4% today from yesterday’s high at 50.93%.

The price of Bitcoin was sitting at $3951 on its lowest point yesterdays at has increased at first to around $3994 level where it retraced slightly and continued on moving to the upside today increasing by 3.73% coming to $4098 at its highest point.

On the hourly chart, you can see that the price action looks impulsive as the price increased parabolically to the upside in a five-wave manner. In conjunction with the price action movement, we have seen today in which the price made a higher low we have most likely seen the three-wave ABC correction to the upside after previously one to the downside ended around the intersection of the ascending trendline and the 0.618 Fibonacci level which both serves as strong support points.

If this is true then the price of Bitcoin has completed its B wave from a higher degree count which is why more downside would be expected from here below the 0.618 Fibonacci level, but that might not happen in a straight line as the price is surrounded by significant support/resistance points that are to be interacted with.

The price is now going to start another five-wave movement to the downside if my count is correct and seeing the first signs of struggle on the last hourly candle the sellers could be triggered but this “better price”.

The price is again above the horizontal resistance at $3994.4 which is a good sign and has come up above the previously seen sideways correction which ended on a breakout to the downside. This could indicate further price recovery but we are to see the potential behind the increase as we could be seeing the start of another corrective movement after the price of Bitcoin previously came down by 4.31%.

If we are seeing the start of another corrective structure this five-wave movement would be its first wave which means that we could see the price spiking even further to the upside on the C wave, potentially breaking the resistance around the 0.786 Fibonacci level.

But as this would be another retest of the above resistance it could very well be the 5th wave of five-wave correction instead of a three-wave ABC.

The cryptocurrency market has experienced an increased in the last 24 hours which looks impulsive but is most likely a corrective one out of the higher degree correction in which case it would be the B wave.

This indicates that we are to see immediate price decrease if true, but then another increase could be made above the level of today’s high to upper significant resistance point at around $4130.

From the depth of the now expected downtrend we shall see the potential for another increase scenario but for now, my primary call stands for more downside to be expected as the trend should continue after this corrective increase ends.