The Crypto Market is Rallying: Where is it Headed? (Bitcoin Price Analysis) 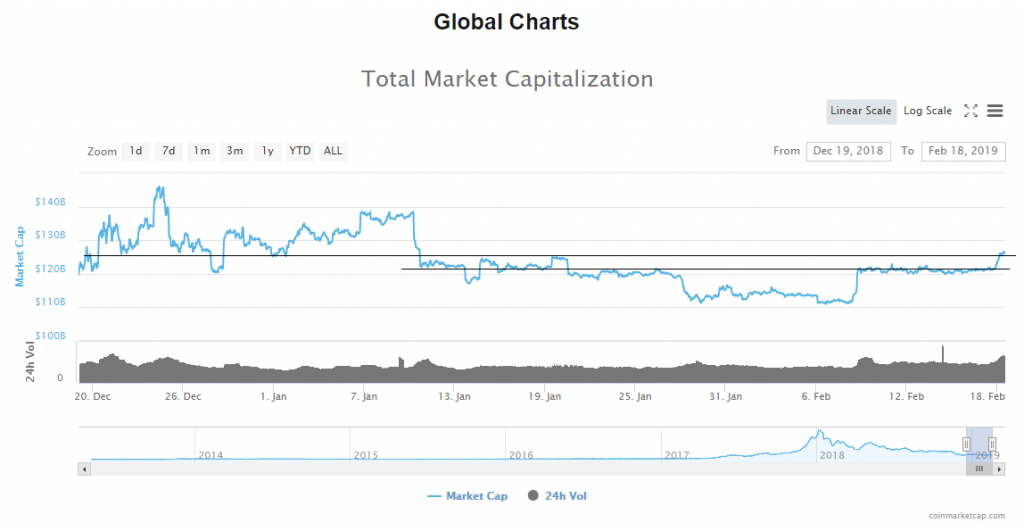 From Friday when the evaluation of the cryptocurrency market cap was $120,228,462,318 at the open we have seen stagnation as the evaluation moved sideways but on Sunday there was an attempt for a breakout from the range in which the evaluation was stuck and the evaluation spiked to around $123B but the evaluation pulled back quickly as it came down to $ 120,775B, only, indicating that some bullish interest.

From there the evaluation started increasing again and it came up to $123 again on today’s open and managed to continue its upward trajectory going past its resistance point and is currently sitting at $126,511,905,849 at its highest point today.

Now we are most likely going to see some minor consolidation around these levels as past resistance would get retested for support and potentially forming a cluster from which a strong continuation could occur.

The market is in green today with an average percentage of change among top 100 coins ranging around 3%. The biggest gainer is Ethereum with an increase of 11.32%.

Bitcoin’s market dominance has been decreasing as it came down from 52.77%  on Friday to just now below 52%.

Looking at the hourly chart we can see that a breakout occurred from the descending channel on the upside which is why the channel has been validated as a retracement after the first impulsive increase on Friday 8th and now that the price continued its upward trajectory the count in which we are seeing the Intermediate Y wave also got validated.

The price is currently above the 0.5 Fibonacci level which was a significant horizontal resistance point but the price is close to the bold black line which is the most significant resistance point to the upside. As this is the second increase and the third move in total we could expect to see two more waves – 4th correctional wave when this currently upside ends after which another 5th wave to the upside should develop because the Intermediate Y wave would be the impulsive 5-wave move as a continuation of the one until 24th of December last year.

Considering this expectation and the vicinity of the most significant resistance point to the upside from the current levels of the price of Bitcoin we could see further breakout as the 4th correctional wave development could get triggered by that resistance. If this happens I would expected to see another retracement and a lookout for support around the 0.5 Fibonacci level again potentially in a form of another descending channel who’s resistance line would be the bold black line.

Zooming out to the 4-hour chart you can see why I have been saying that the bold black line is the most significant resistance point to the upside. It was the baseline support from since the start of the bear market and was broken on 21th of November last year when the price of Bitcoin went from around $6470 to $3753 and continued moving lower and reached $3230 at its lowest point since the start of the bear market.

After this downfall, the price of Bitcoin started its first recovery attempt which is the mentioned impulsive move until 24th of December and was the first wave from the WXY correction. W wave was stopped out at the bold black line were strong resistance was encountered which resulted in the fast price rejection and a 45-day correctional movement to the downside, so this Intermediate WXY is a retest of the prior support for the resistance.

If the price continues going above the bold black like the next price target would be at around $4320 area was the intersection with the descending triangle and the horizontal support now serving as resistance is.

Bitcoin’s hourly chart technical indicators are signaling a buy with moving averages signaling a strong one.

The post The Crypto Market is Rallying: Where is it Headed? (Bitcoin Price Analysis) appeared first on Blockonomi.