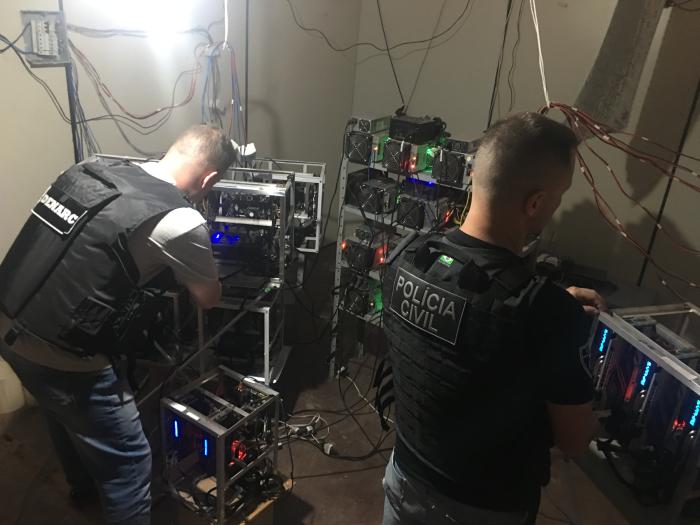 Police in Brazil has apprehended a suspect who is believed to have operated a clandestine drug lab, laundering the proceeds using cryptocurrencies.

According to a local report published on April 23, the State Department of Drug Trafficking (Denarc) in Porto Alegre, Rio Grande do Sul was able to trace a Bitcoin mining lab to a small house, while officials were on the trail of the suspected drug trafficker. The police considered the sighting unusual, as they found 25 separate cryptocurrency mining rigs at the site.

Illegal electricity and a suspicious operation. Grounds for an arrest?

The rigs reportedly ran 24 hours a day, operating on sophisticated hardware and software estimated to be worth about 250,000 reals (about $63,000).

The police claimed that the man who assumed responsibility of the mining equipment argued that he had rented the place and was running the Bitcoin mining shop as a business investment. The man denied involvement in any criminal activity in that area, pointing out that his “investment” was completely legal. However, he was charged for stealing and the illegal use of electric power in the vicinity.

His equipment was also seized, as the officers suspected that they might have been smuggled into the country from China. Police also suspected that the man might have been a lookout or an illegal drug trafficking organization. Beyond the mining equipment and irregular electricity supply, the report claimed that they also found a firearm with an erased serial number, as well as a motorbike with cloned number plates.

A translated statement from Adriano Nonnenmacher, a police officer who was part of the raid, read, “The flat is well-hidden. We are going to investigate further. Everything points to a Bitcoin mining operation. They could be exchanging the money and use it to fuel drug trafficking. There’s also the possibility that they are using the funds derived from drug trafficking to buy Bitcoin.”

According to a press release published by the Manhattan D.A.’s Office on April 16, the individuals were suspected of running stores o the Dark Web, shipping “hundreds of thousands” of counterfeit drug tablets.

A raid conducted by authorities resulted in the recovery of 500 glassines of fentanyl-based heroin, 420,000 to 620,000 tablets of alprazolam, as well as gamma-hydroxybutyric acid (GHB), ketamine, and methamphetamine.

The alleged traffickers reportedly sold the drugs to customers across 443 states in the U.S., laundering $2.3 million in BTC by using preloaded debit cards and withdrawing their fiat currency at various ATMs. They are set to be arraigned before a New York State Supreme Court, with charges leveled against them including first-degree money laundering, as well as fourth and fifth-degree conspiracy.