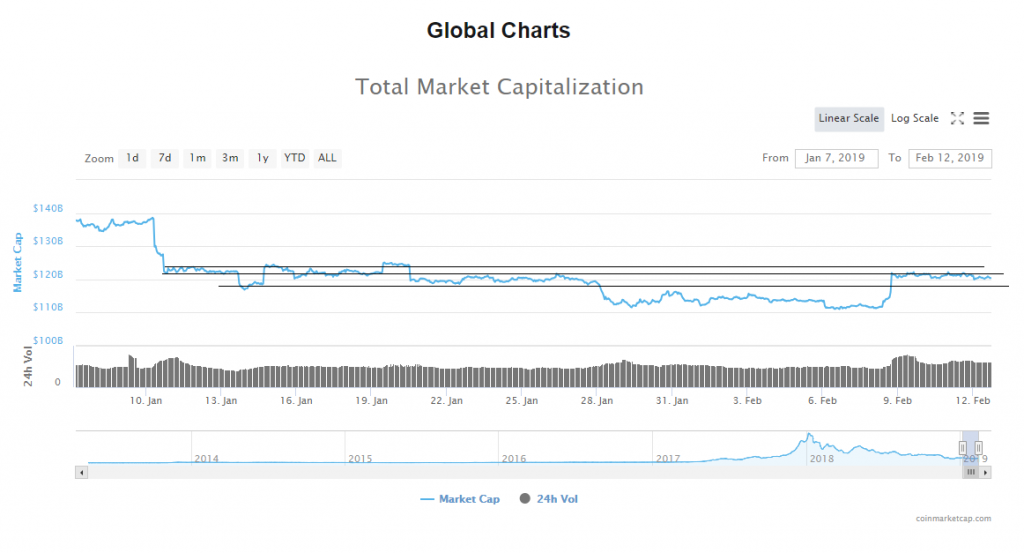 From yesterday’s open at $122,3B the evaluation of the cryptocurrency market cap has in a retracement and is currently sitting around $120,4B area.

Looking at the global chart we can see that the evaluation is stuck in a horizontal resistance range which was previous support and is hovering below its midpoint indicating that the buyers are putting pressure on the level. As the Friday’s momentum brought up the evaluation by around 10 billion dollars we might see the momentum wearing down as the resistance zone proves to be stronger, but if the momentum is still present we are going to see a breakout to the upside.

In either case, a retracement back to the horizontal range lower support line would be likely as if the market evaluation is to go higher some firm support is needed to be established.

The market is in red today with an insignificant percentage of change among top 100 coins in the last 24 hours. The biggest gainer is Komodo with an increase of 10%. 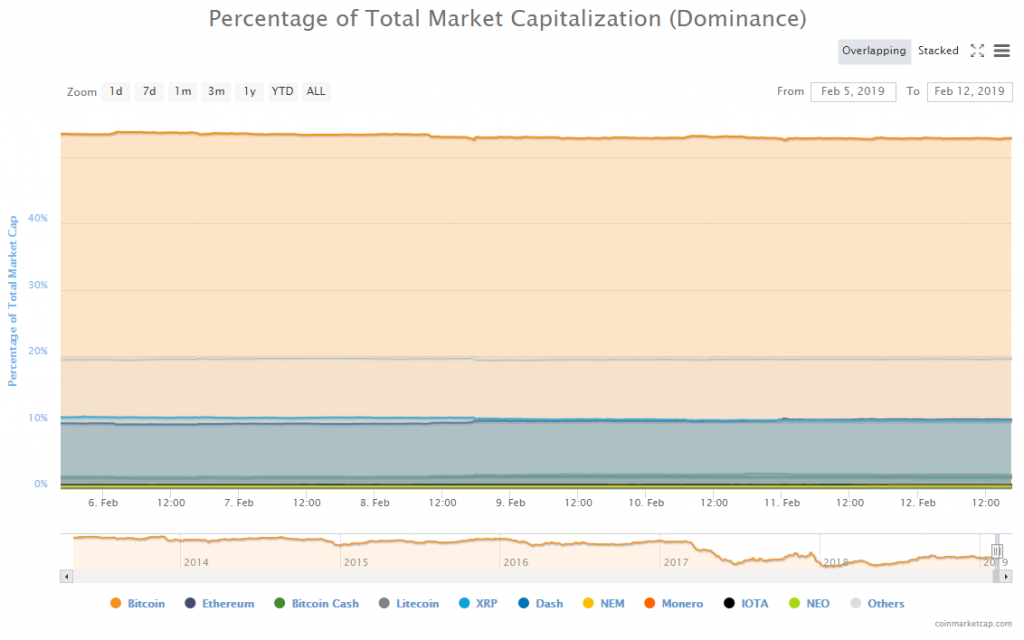 Bitcoin’s market dominance evaluation has also been hovering around the same levels as yesterday and is currently sitting at 52.8%.

Looking at the hourly chart you can see that the price action has created another minor falling wedge out of which it’s resistance line is the resistance from the descending channel from which resistance the price has interacted on Friday’s spike and as the interaction ended as a rejection now we are seeing a retracement. The price has managed to stay above the 0.382 Fibonacci level which is a good sign but has also gone below it on today’s open when it reached $3647 at its lowest point which was an interaction with the minor falling wedge support line.

If the increase we have seen start on Friday is the start of the Intermediate Y wave than this retracement is only a minor one before a trend continuation to the upside. But if the increase we have seen is the prolongation of the Minor WXYXZ correction than the falling wedge would be the area where the sellers would once again gain control and will push the price back down to the levels form which the increase was made and then even lower as the Z wave should start.

The first outlined scenario is still my primary one but from the depth of the retracement, we are going to receive a confirmation of either projection.

Zooming out to the 4-hour chart you can see my projected target for the end of the current increase and is around the interaction with the bold black line which is the most significant resistance point to the upside and would in price terms be around $3930.

If we are in fact seeing the Intermediate Y wave developing one more upswing would occur and a breakout from the current descending structure, but if the Z wave hasn’t ended than the increase made was the continuation of the Minor correction and the Z wave is to start developing to the downside from here.

The first scenario looks more likely but the retracement we are currently seeing is taking a bit longer to develop as it would normally in the case of an impulsive move which is why there is a possibility that I would end on a lower low like it did in the case of the first X wave from the Minor correction.

From the depth of the retracement, we are going to see which scenario gets validated.

Bitcoin is in the buy zone as indicated by the hourly chart technical indicators.