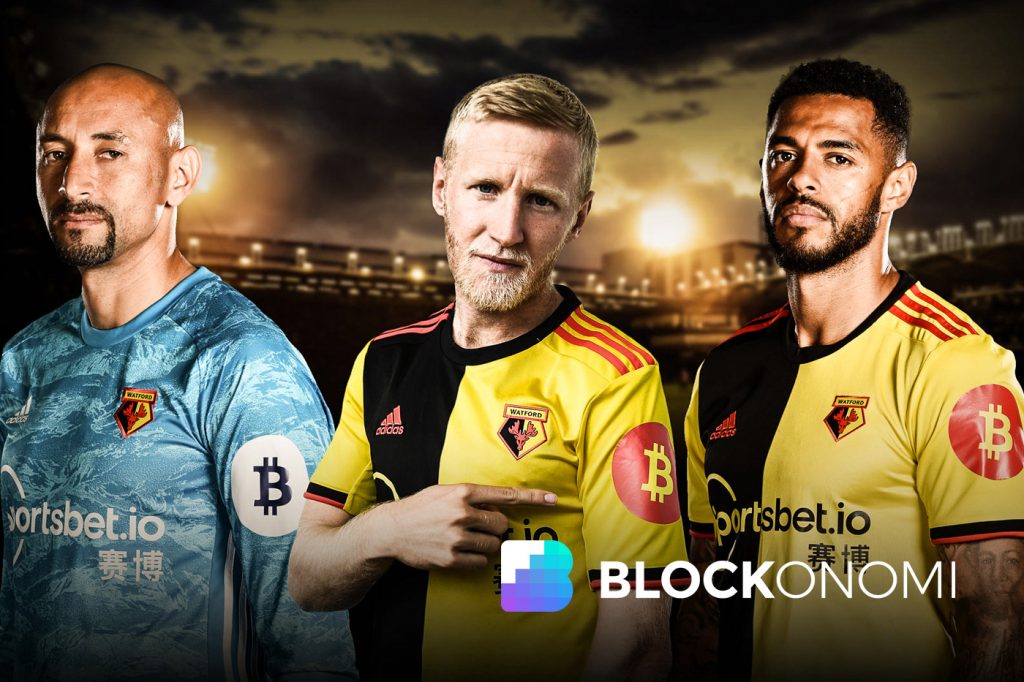 Watford Football Club recently expanded its sponsorship deal with Sportsbet.io, which includes getting the bitcoin logo branded on the sleeves of the club’s jerseys. The move would create wider exposure for bitcoin among the fans and the general public.

Bitcoin and cryptocurrency generally continue to get widespread adoption, particularly from the sports industry. Over time, the nascent industry has collaborated with high-profile sports teams, who in turn accept cryptocurrency as a means of payment for their merchandise, tickets, etc.

Although bitcoin is still a long way from getting mainstream acceptance due to the fear of volatility and risk, partnership deals with some major industries show that more sectors are beginning to recognize the numerous benefits of cryptocurrency.

English Premier League football club, Watford FC announced on its website on Thursday (September 12), that as part of its sponsorship deal with Sportsbet.io, a sports betting platform and primary sponsor of the club’s jerseys, the bitcoin logo would appear on the club’s shirt sleeves.

Starting on Sunday (September 15), the Hornets would have the “B” logo for bitcoin on their sleeves, in the match against Arsenal FC. According to the deal, the bitcoin logo would be on the jersey’s sleeve throughout the remainder of the 2019/2020 EPL season.

Speaking on the new development, the Head of Marketing at Sportsbet.io, Justin Le Brocque, said:

“Our partnership with Watford marks a major disruption in the world of traditional sports sponsorship, and by adding the Bitcoin logo we hope this world’s first partnership will create even more buzz around cryptocurrencies.”

Furthermore, Le Brocque noted that enlightening the public on the benefits that abound in the cryptocurrency sector and dismissing the common negativity and FUD surrounding virtual currency was sometimes challenging.

Free 2 mBTC Bets up For Grabs!

Apart from using the logo to create awareness, the sponsorship is reportedly crowdfunded, meaning that anyone with bitcoin could benefit from the club’s sponsors. Other perks include exclusive Watford FC merchandise, a chance to be at the public LED space displayed live matches, among others.

Chairman and CEO of Watford Football Club, Scott Duxbury, also spoke on the bitcoin logo deal. According to Duxbury:

“Placing the Bitcoin logo on a Premier League shirt is something that challenges the accepted norm. We’re excited about the partnerships and the potential for new global conversations that it could help start for our club.”

The sports betting platform is having a free giveaway to celebrate the latest sponsorship. All players of the betting platform would get a 2 mBTC (0.002BTC) free bet if the Hornets score against the Gunners in their Sunday match.

Back in January 2018, Major English football club, Arsenal FC, partnered with iGaming company, CashBet, to promote the firm’s new crypto token, CashBet Coin. The collaboration was reportedly the first of its kind, between a major football club and a cryptocurrency platform.

Cryptocurrency exchange platform, Coindeal, also partnered with Wolverhampton Wanderers FC, becoming the primary sponsors of the club. In July 2019, the digital currency exchange renewed its sponsorship with the English club and celebrated the renewal with a giveaway of their crypto token.

Outside the EPL, football, and sports generally, are warming up towards bitcoin and other virtual currencies. Blockonomi recently reported the collaboration between Turkey’s largest cryptocurrency exchange, BtcTurk and Turkish football club, Yeni Malatyaspor.

A similar move was made by another football team, Miami Dolphins, who, through a collaboration, adopted Litecoin as the team’s official cryptocurrency.