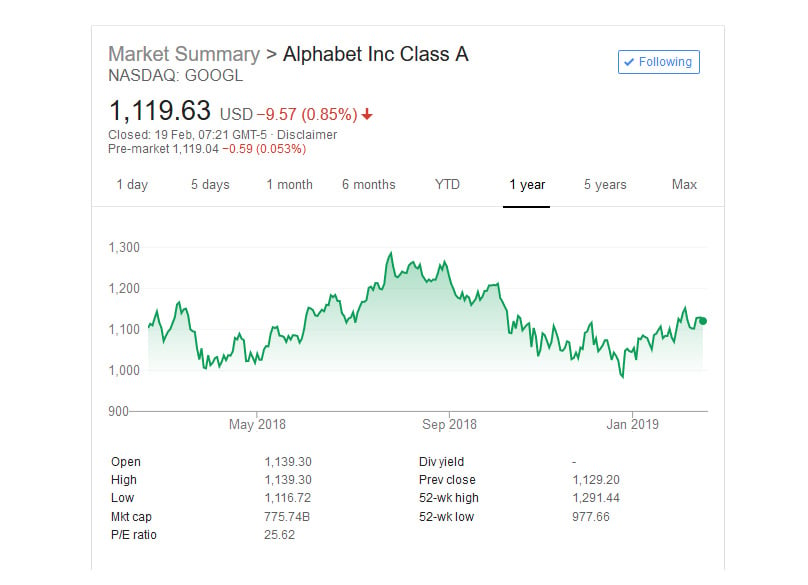 With every new year, come new speculations on who will become a big winner in the market. Which sectors will become more prominent? Which companies will explode? Or implode?

Today we will be looking at 3 stocks which I personally have high expectations for in 2019.

While these may not be the stocks with the most potential, I think they combine two key factors:

This is not something that can be said of many stocks. Your traditional “safe” stocks usually belong to saturated markets, but I believe these innovative companies are set to make some interesting changes and add some new elements to their business which could propel their earning.

Alphabet is the parent company of Google, and I believe that it has tremendous potential to keep growing, something which is hard to do when you are already one of the largest tech companies in the world.

Alphabet is not only responsible for the Google search engine. It actually boasts 8 products with over 1 million users such as Youtube and Google Drive.

Furthermore, Alphabet is also working on some very interesting projects that could pay off, not including the big 8 we just mentioned.

Alphabet is currently crushing it with Access, which is a part of the firm that sells internet and TV services.

But Google is also leading the market in cutting edge healthcare tech through its subsidiary Verily, which has already proven quite profitable thanks to its licensing and research agreements.

On top of that Verily is currently working on developing miniaturized continuous glucose monitoring systems, surgical robots, and smart lenses for adaptive vision correction and another Alphabet healthcare subsidiary has an even more ambitious goal.

The company’s Calico business is researching ways to extend the human life-span.

Google also has its already well known X program, which is working on many space related projects.

But another two interesting and lesser known subsidiaries are Chronicle and Waymo:

Chronicle focuses on cybersecurity, demand for which will definitely rise in the future.

Waymo, is an incredibly exciting branch of google, focusing on self-driving technology and is already offering a self-driving taxi service in Arizona. This could be the start of a revolution

In addition to these initiatives, Alphabet is also placing bets on other companies. Its CapitalG business operates a growth equity investment fund with investments in companies including ridesharing service Lyft and online brokerage Robinhood. GV is the company’s venture capital arm that has made strategic investments in leading-edge consumer products, healthcare, AI, cybersecurity, and robotics businesses.

While Youtube is already one of Google’s star products, we believe that it has the potential to turn in a lot more profit than it is now

Think of Amazon Prime , and Netflix, they have already realized the incredible power of subscription based programmes. The whole world is turning to these methods nowadays, people like the idea of contracting a service for an affordable monthly fee, and so do companies.

These subscription programmes are reliable revenue streams which are constant and predictable.

We believe Youtube could really benefit from implementing this service, and we think Google knows it too.

With over 1.8 billion users, Youtube could bring millions of dollars to Alphabet if it just manages to capture a fraction of these users as recurring subscription payers.

As mentioned above, Alphabet’s star products have over a billion users each.

Do we really think over 8 billion people will simply turn around and stop using these?

Warren Buffett would describe Alphabet’s durability factor as a moat. A moat presents a great visual picture for what Alphabet offers. The company’s products are so widely used that they’re hard to compete against. And the more they’re used, the more valuable they are to the advertisers who provide more than 85% of Alphabet’s total revenue.

A moat defends a castle — or, in this case, a business. But Alphabet isn’t just playing defense with its core Google properties. The company is developing ways to more effectively monetize applications such as YouTube and Maps. It’s also using a type of artificial intelligence (AI) called machine learning to improve user experiences and increase advertising opportunities.

In my opinion, this is a great time to buy this stock at a discount. We believe this stock is poised to keep moving up, and even a slowing economy is unlikely to stop this.

We definitely recommend buying Alphabet now., before it gets too expensive. So go to your stock broker and do it.

Forms of electronic payment are rapidly on the rise, when you think about it, out of the thousands of years currency has been in existence, electronic transactions are still a fresh idea. Here comes Mastercard, a household name and worldwide leader in digital payment processing. The plastic money company, which earns a cut for simply facilitating a transaction rather than lending money itself and has an enterprise value of $190 billion as of writing this. It also has a staggering operating profit margin of 54.3% through the first three quarters of 2018. Those two items paired together could be reason enough to make Mastercard a core portfolio holding. 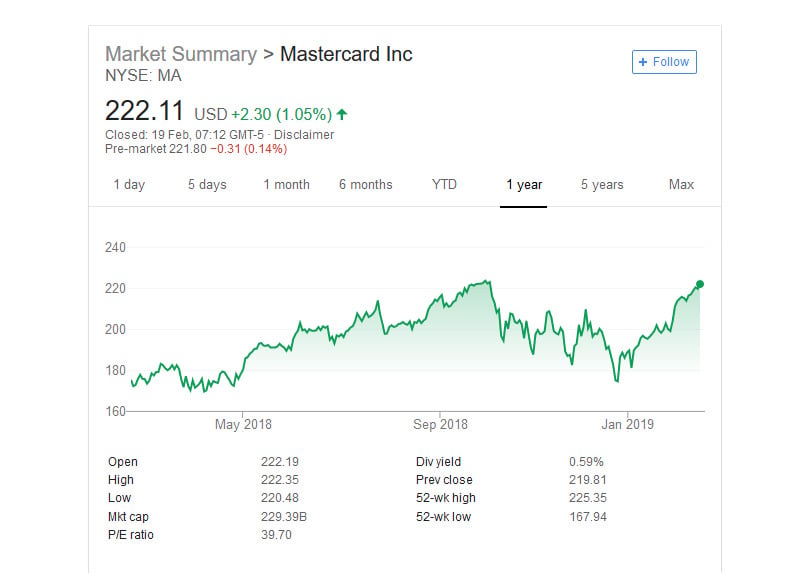 Mastercard is proof that big doesn’t equal boring, though. With digital transformation only just beginning in many countries, there is plenty of growth left in the tank. During the third quarter of 2018, gross dollar volume (the total value of transactions) was up 13% from a year ago, leading to a 15% increase in revenue and 36% increase in earnings per share.

Earning a fee every time someone swipes a card (or makes a transaction online) bearing the Mastercard name is a simple business model, but we should mention that the model could suffer during global economic downturns. Growth depends on transaction volumes rising, and during economic slumps those tend to decline. With worry that a worldwide slowdown is beginning, that may give some investors pause on this stock. Nevertheless, with digital transformation just beginning, the global economy should continue to edge higher on average over the decades. That makes Mastercard a stock worth buying and leaving alone for the long haul.

Mastercard is an exciting stock with a lot of potential in my opinion.

Shopify is PaaS that allows aspiring ecommerce entrepreneurs to set up their shop in an easy and seamless manner.

E Commerce is no longer the future, it is the present. This industry is growing at over 20% annually and it doesn’t seem like this will stop any time soon.

Shopify is capitalizing on this, just like the pickax makers profited from the gold-rush in the 1800s. 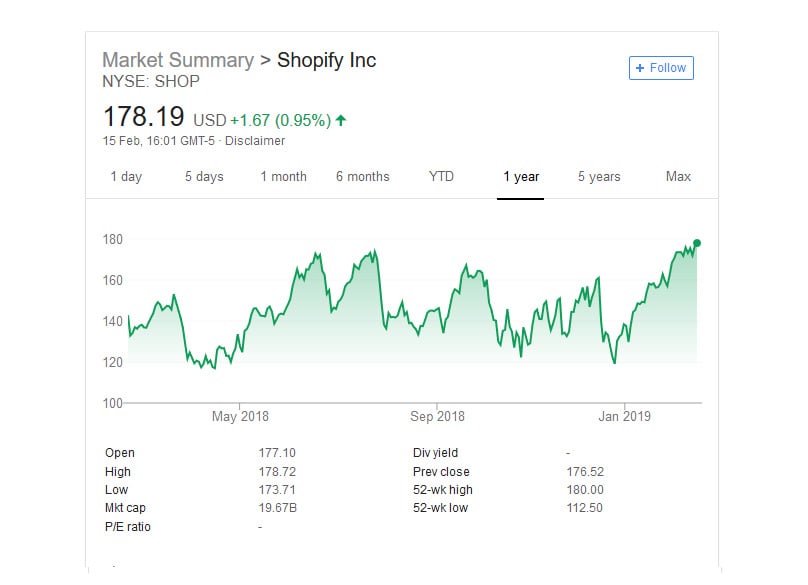 There are two ways in which Shopify makes money. The first is subscription revenue. If someone wants an online presence for their business, they can pay as little as $9 per month to set up shop. If this business grows, it will likely stick with Shopify and upgrade to a pricier plan since all of its data are on Shopify’s platform and it would be a pain to switch.

While the up-front costs with building Shopify’s platform are high, it costs next to nothing to rent it out to businesses via the cloud, which is essentially what the SaaS model is all about. Because of that, Shopify gets to keep almost 80% of subscription revenue as gross profit.

With the number of merchants on Shopify surging 35% year-over-year to 820,000 in the most recent quarter — and the number of high-tier Shopify Plus partners growing over 45% to 5,300 — it’s easy to see why the company has experienced results like this:

The other way Shopify makes money, is much like Mastercard, through fees captured on Shopify Payments. This is Shopify offering up an easy way for merchants to get customers to pay for goods they buy online. Because Shopify is simply providing a solution that relies mostly on banks and credit card companies, most of the money does not stay with Shopify; it goes to those institutions. In the merchant solutions segment, Shopify keeps less than 40% of the money as gross profit.

That said, in the United States, Canada, Australia, and the U.K., over 80% of merchants using Shopify use Shopify Payments. Because the volume of stuff sold on Shopify has increased so much — gross merchandise volume grew 56% last year to $41 billion — revenue from merchant solutions has grown even faster.

However, Shopify is not that profitable right now, in fact, it’s staggering level of growth is not unrelated to the fact that they spend millions on advertising and R&D.

In fact, Shopify still spends more on acquiring a new merchant than it gains from one.

Shopify has demonstrated its growth potential, but it’s spending that money to draw merchants in and keep them there. Eventually, however, it will spend far less on sales, and modestly less on R&D. When that happens, profits will soar.

And evidence points to successful merchants staying with the company. While no figures were offered for 2018, monthly billing retention rates have always been above 100%. Merchants who stay in business stay with Shopify.

There are already 2,500 apps available on Shopify’s app store — most created by third parties. For the most part, these apps can’t be bought anywhere else. The number will surely grow thanks to the network effects at play.

Shopify creates a whole ecosystem around its service which is honestly very complete and hard to leave once you are part of.

This concludes our article on the top 3 stocks to watch out for in 2019. While these may not be unheard of new companies that will increase 10 fold in value, they are definitely solid, established and on top of that, because of what I have explained above, have great potential to keep growing and keep increasing market share and earnings.

This triple threat makes these 3 stocks a definite must have in your portfolio in 2019.