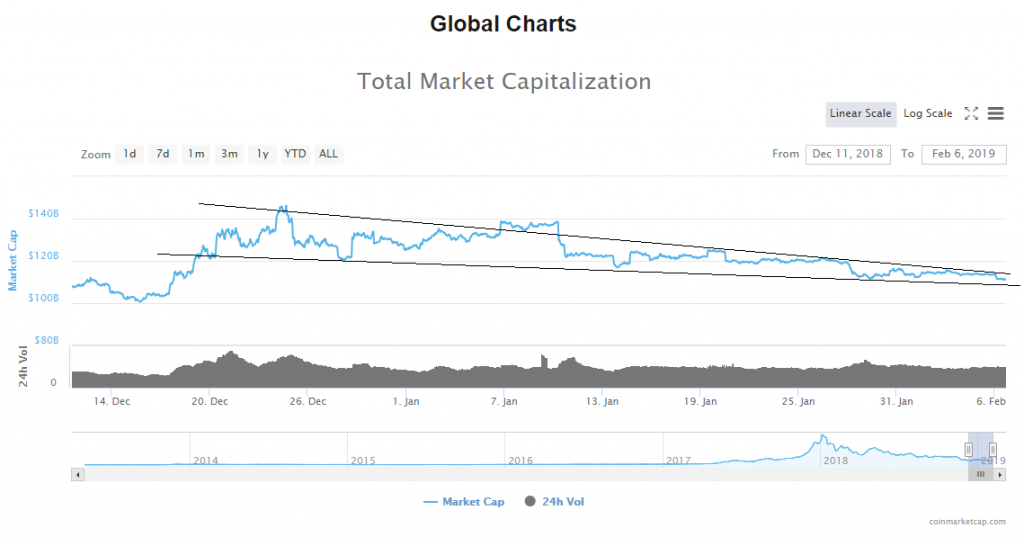 From yesterday’s open at around $113,644,000,000 the evaluation of the cryptocurrency market cap increased at first to $114B but retraced afterward hovering around the $113,5 mark before finally, it started plummeting down as expected and is currently sitting at just slightly above $111B.

Looking at the global chart you can see that the evaluation is still inside the territory of the falling wedge in which it is correcting from 24th of December and the interaction with its support level hasn’t happened.

The market is in red with an average percentage of change in the last 24hours ranging from 1.56%-5.42%. The biggest loser is Holo with a double-digit decrease of 10%, while the biggest gainer is Binance Coin with an increase of over 11.8% in the last 24 hours.

Bitcoin’s market dominance has been increasing and came up from 53.35% on yesterdays one to 53.83% at its highest point today but has now retraced slightly and is sitting at around  53.75%. 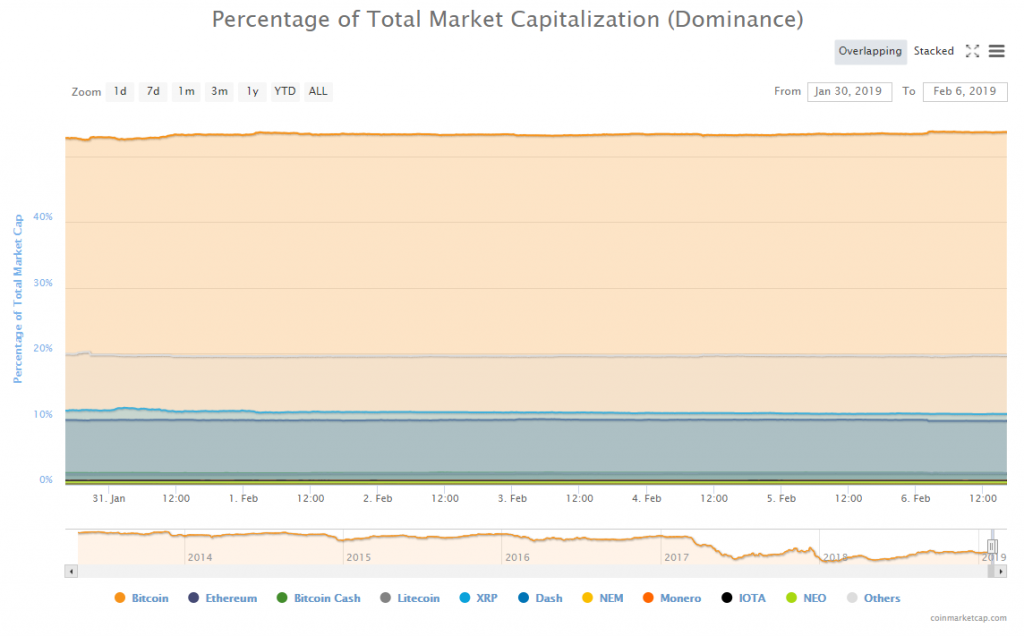 From yesterday’s $3513.4 the price of Bitcoin has decreased by 1.72% as its currently being traded at $3452.9. As the price did go lower as it reached $3439 and spiked further down below the prior low level but only for a short period of time as the hourly candle managed to close above.

Looking at the hourly chart you can see that the price broke its previous horizontal support levels on the Fibonacci level and went below the 0.236 Fibonacci level which serves as the most significant support from the last correction labeled as the 4th Minute wave. The price is currently interacting with the broken level and judging by the current candle is getting rejected as the prior support now serves as resistance.

From yesterday’s open the price attempted to go past the 0.618 Fibonacci level and after the two failed attempts the buyers gave up which is why the support was removed and is why the price is currently in a lookout for it.

From yesterday’s open at $117.5 the price of Bitcoin Cash has fallen by 6.38% at first as it came down to $110, but since it did the buyers have pushed the price back to the level of yesterday’s open where it encountered resistance again and is currently a bit lower to $116.1.

On the hourly chart, you can see that the price has come up to the descending channels median line and spiked up above reaching $121.1 it but was immediately pushed back below it which indicates a strong presence of sellers. As previously price broke out from the symmetrical triangle on the downside the previous support level is now being retested and since the price got rejected fast we are likely seeing a trend continuation.

The ascending channel in which the price corrected to the upside was the second wave off of the three wave correction that consists the Z wave for a Minor WXYXZ correction which is why more downside would be expected.