From yesterday things haven’t changed much for the crypto market, The evaluation is around the same levels as it was on yesterday’s open.

Looking at the global chart you can see that the evaluation went higher than on yesterday’s open and reached $111.734,000,000 at its highest point, but has fallen to the levels of yesterday’s low again and is now in the mid-range. 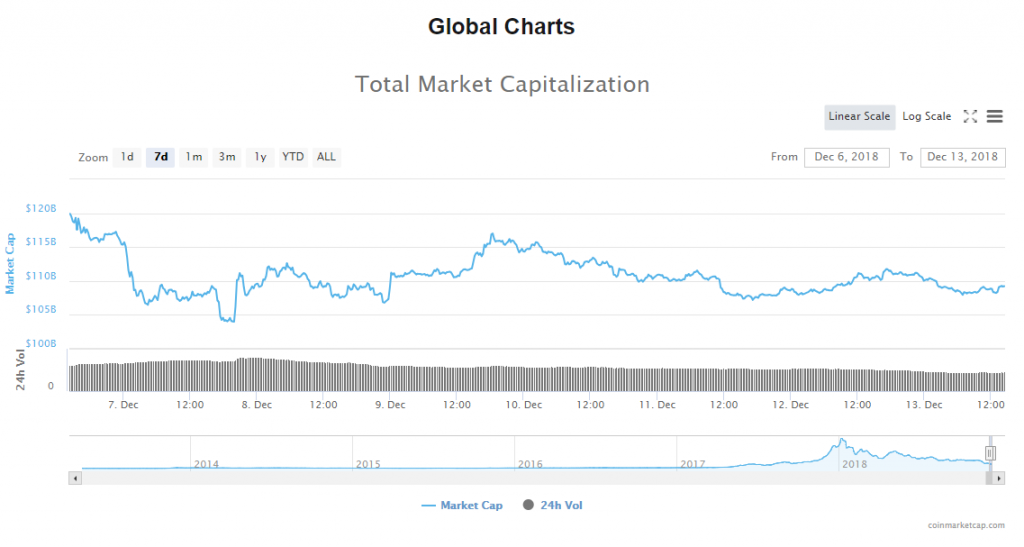 Consequently, the market is in red with an average percentage of change among top 100 coins being around 1.7%.

Bitcoin’s market dominance has also stayed around the same levels from yesterday as it’s currently on 54.9% level.

From yesterday’s open at $3420 the price of Bitcoin has increased by 1.9% measured to the current level on which the crypto is being traded which is at $3491. The price went further up and reached $3557 yesterday but from there fell again to $3459 before getting to the current levels.

The hourly chart looks undecisive as both sellers and buyers are putting equal pressure on the price at the moment which is why a symmetrical triangle formed. This can also be indicated from the MACD indicator who’s moving averages have come together in a point. The price is currently retesting the horizontal level at $3493 for support and if the support isn’t there it will go to the triangle’s support line for a retest next. If the support is there we might see a breakout from the upside which what I am expecting to see.

From yesterday’s open when the price of Litecoin was $23.598 to the current levels at $24.57, the cryptocurrency has increased by 4.46%. The price went higher at first to $25.45 on yesterday’s high from where another decrease occurred.

Yesterday’s open was on the triangle’s support line and the high was at the resistance so the price is currently in the mid-range from the yesterday’s move. As this is a symmetrical triangle a breakout is likely from both sides but since the bears are in control of the market even if the price goes up I would be expecting a lower low to around the levels of the horizontal support at $21.9

Looking at the hourly chart you can see that the price went higher yesterday as well, and reached just slightly below the horizontal resistance level before it came down to retest the previous one and is now above the $1.986 horizontal level. Since the price found support there and is currently in an upward trajectory, above the 50-hour SMMA we can see another attempt to break the mentioned resistance.

EOS is in the buy zone.

After some period of consolidation the prices are ready for the next move, so a breakout from the current symmetrical triangle seen on the chart of analyzed coins and as well as the charts of many major cryptocurrencies. The direction of a breakout is still not clear. My yesterday’s Bitcoin Elliott Wave analysis points out that a breakout from the upside should be expected followed by another lower low, but this might not happen as the prices could just go further down in a straight line from here.

The post Crypto Market Update: Stagnation But for How Long (Bitcoin, Litecoin and EOS Price Analysis) appeared first on Blockonomi.