From yesterday’s low at $124,819,000,000 the evaluation of the cryptocurrency market cap has been increased at first and came up to $131,321,000,000 at its highest points yesterday but since the high evaluation has started falling again and is now around the same levels as on the yesterday’s open.

As you can see from the global chart the evaluation has clearly been in a downtrend for quite a while now, from 14th of November to be exact and the downtrend’s resistance line still hasn’t been broken. If the price finds some support around the levels of the prior low, we might see a breakout from the upside soon. If the support doesn’t hold then another drop in price would follow. 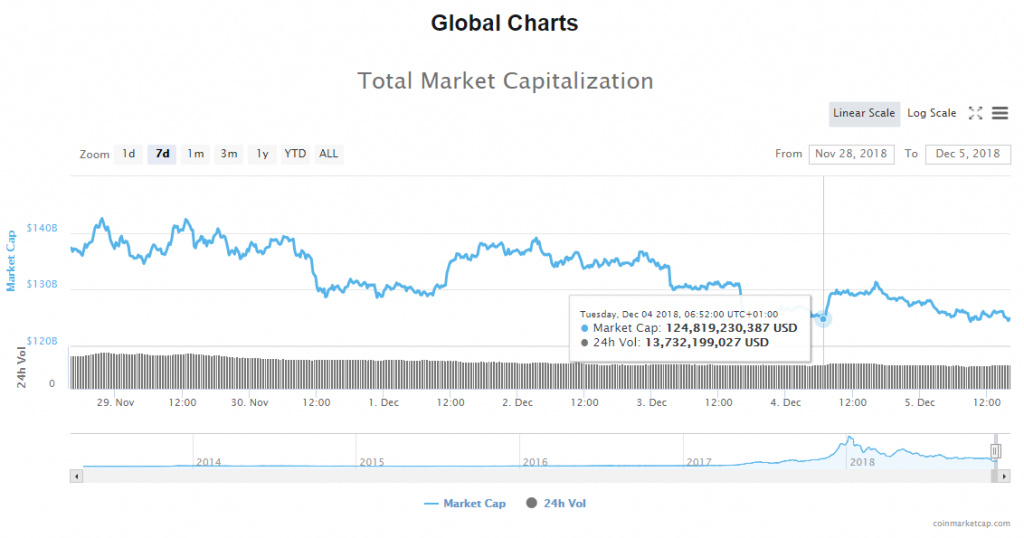 Today the market is in red with an average percentage of change among top 100 coins ranging around 3-7%. The biggest losers are in double digits like for example Nexo with a decrease of 30%.

Bitcoin’s market dominance has increased from yesterday’s open at 53.68% and is currently slightly above 54% level. 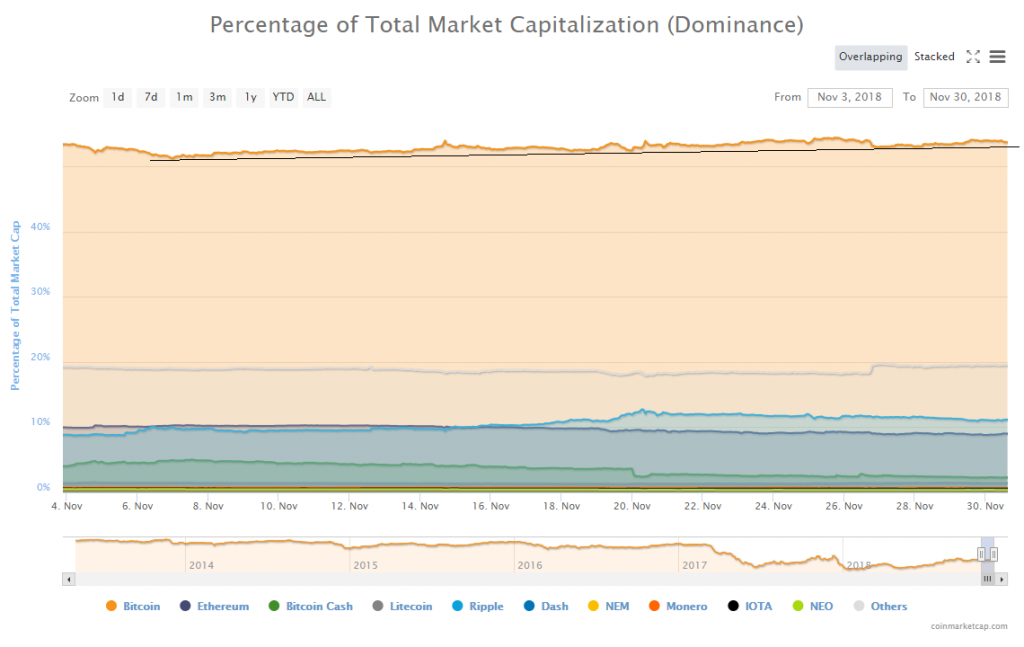 From yesterday’s open at $3830 the price of Bitcoin has increased at first coming to $4090 but has fallen since and is currently sitting at $3891.6 which is an overall increase of only 1.65%. 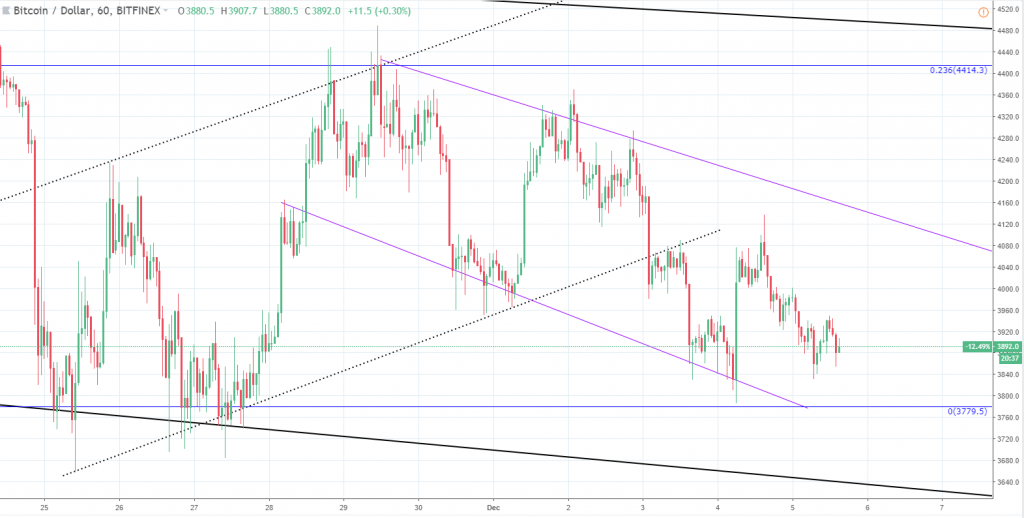 As you can see from the hourly chart nothing has changed much for the price action of Bitcoin since yesterday except we have seen a minor interaction with the $3779 level on the yesterday’s low spike. The price, however quickly came up closing the hourly candle still a bit higher. The price is still in a descending channel which target I have projected to be at the mentioned level but I don’t believe that this interaction was it. I believe that the price is heading down again for a proper interaction and even spiking below it like it did last time potentially all the way down to the downtrends baseline support.

From yesterday’s open at 53.76 the price on Monero has increased at first and came up to $59 which was an increase of 9% but since the price encountered resistance we are now seeing the price decreased from there as its currently sitting at $54.66 which is an overall increase of 1.62%.

Looking at the hourly chart you can see a similar chart pattern like in the case of Bitcoin and many other major cryptos at the moment so the same implies – a retracement back to the prior low levels is expected after which another wave to the upside will occur most likely as the current structure is corrective in nature.

Monero is in the bearish sentiment with technical indicators signaling a strong sell.

From yesterday’s low at $7.14 the price of Neo has increased to $8 at first before falling down again to the same levels following the price of other major cryptos as the market is strongly correlated. The price is currently at $7.3 which makes an overall increase of 1.51%. 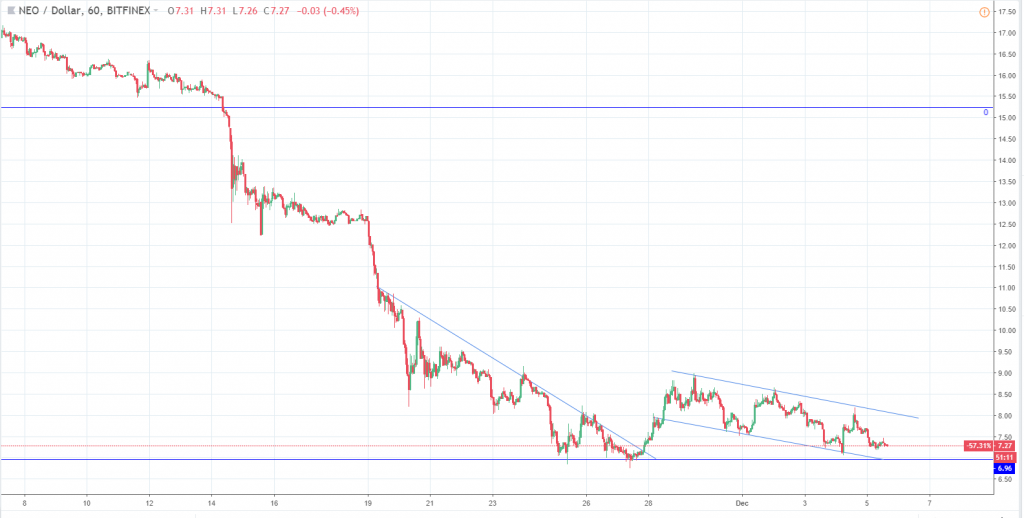 As you can see from the hourly chart the price action has created a descending channel and is currently reaching the levels of the prior low. The horizontal support level at $6.96 served as support in the past so another interaction with the level for a confirmation would be expected before further increase.

The cryptocurrency market is currently experiencing some sideways action as a result of a consolidation after a big drop in evaluation. Before some major moves the support and resistance levels from the current descending range. I believe that the next major move would be to the upside as the price is currently in a correction but before that happens we might see another retest of the prior low levels.