From yesterday’s high at $212,237,336,146 the evaluation of the cryptocurrency market capitalization has decreased by 6,6 billion dollars measured to the current levels. 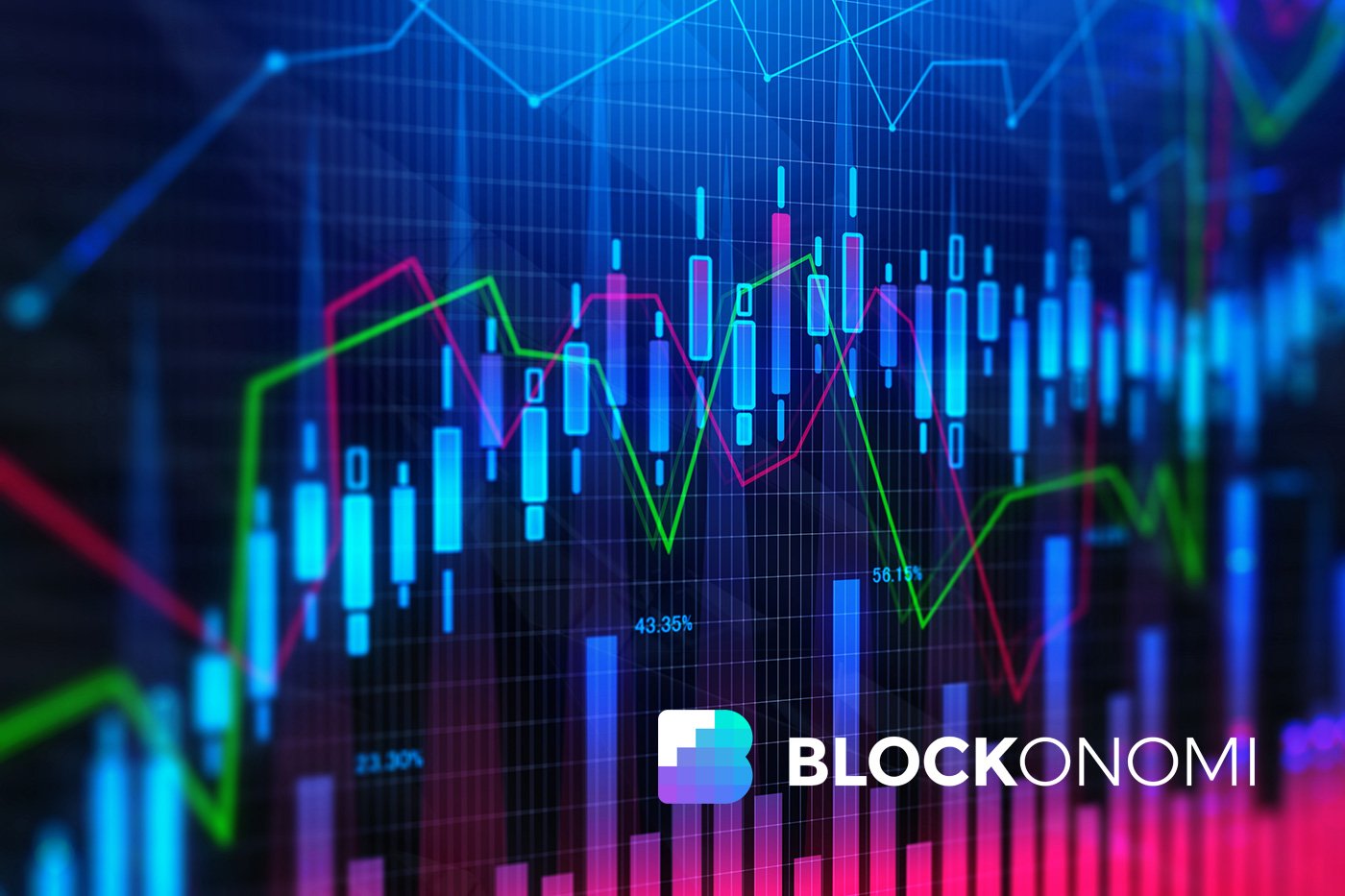 Looking at the global chart you can see that the evaluation fell to the prior resistance level from the triangle from which the evaluation broke out off previously. We are now going to see if the evaluation stays there or continues the downfall as its currently showing signs of rejection. 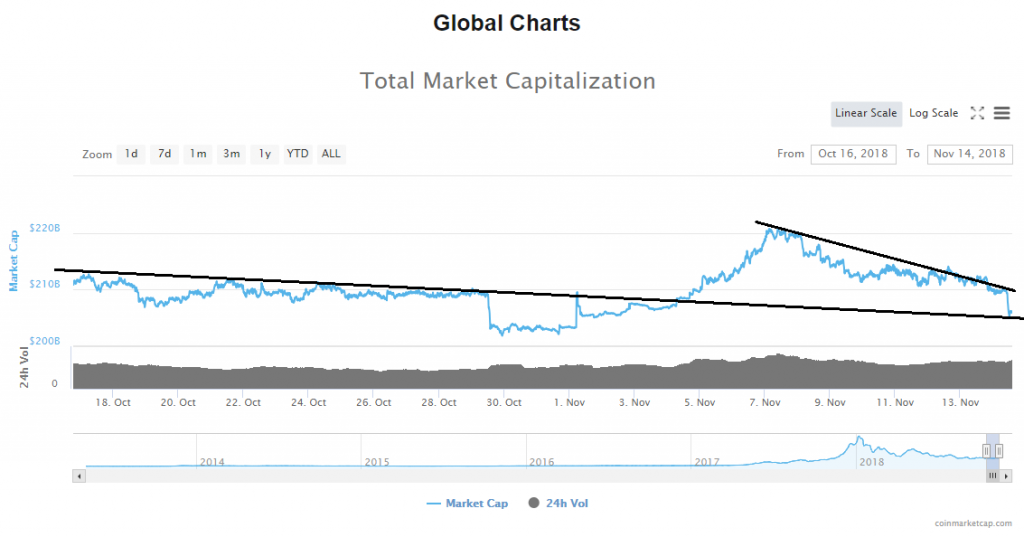 Consequently, the market is in red with an average percentage of decrease among the top 100 coins ranging from 4-8%. Biggest Losers are Decentraland with a decrease of 11%, Wax with 12% decrease and Reddcoin with 12.22%. Biggest gainers are Sirin Labs token with an increase of 16.34% and Etheera with 11%.

Bitcoins dominance has increased about 0.8% from yesterday’s open and is near the territory of the descending triangles structure on its evaluation chart. 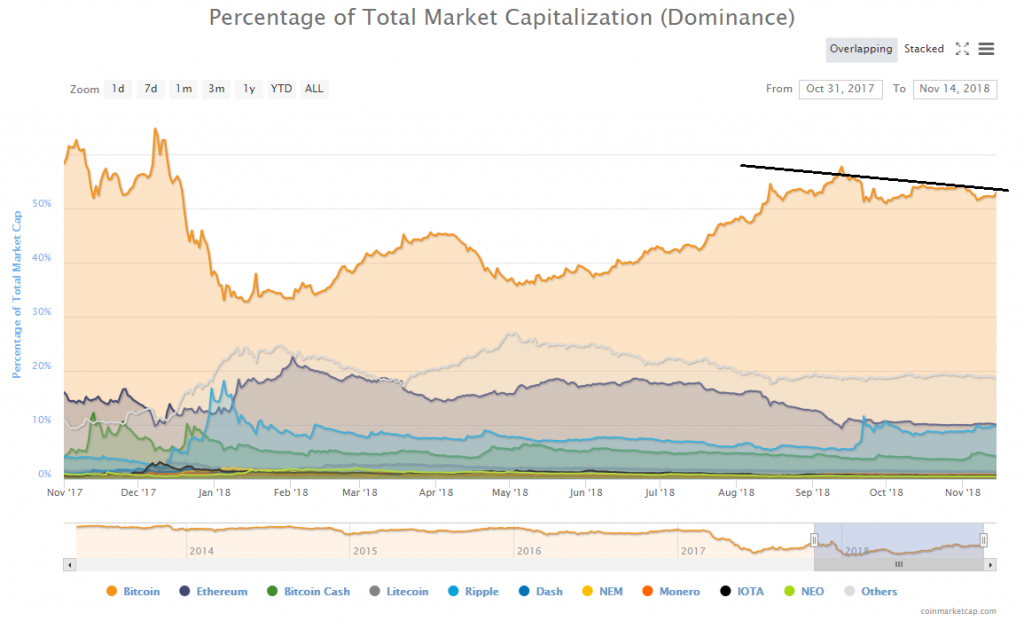 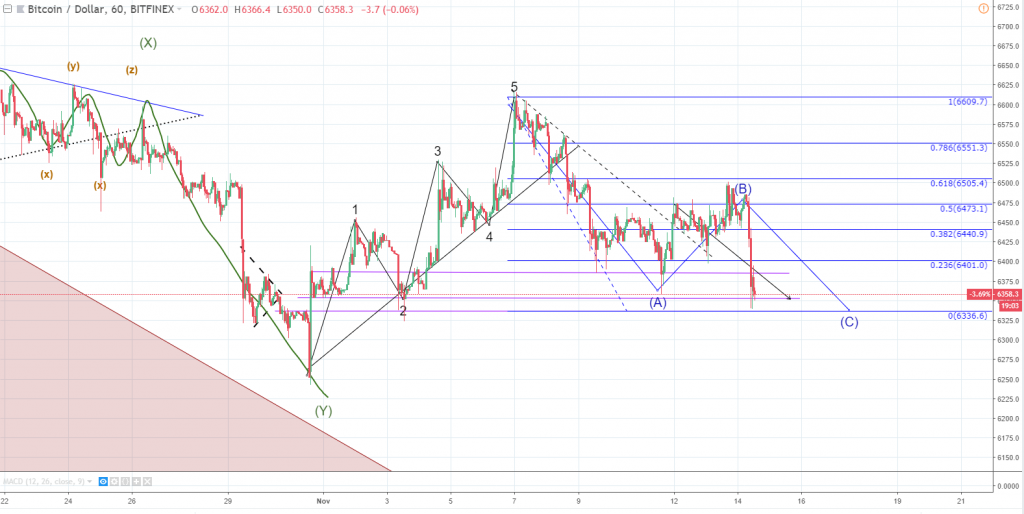 Looking at the hourly chart you can see that my target has been met as the price increased to 0.618 Fibonacci level. As the price struggled to reach the 0.618 Fibonacci level it hasn’t interacted with it before it finally fell back to the end of wave 2 from the prior impulse wave which would be a pretty decent retracement amount if the ABC was only the second wave from a higher degree impulse wave. We are about to see which scenario gets to be validated, this current one in which the price has ended the downfall on an ABC correction and the price is now heading upwards beyond the prior impulse wave high at $6609.

Looking at the momentum behind the sell-off I don’t believe that this is likely but will still be in play until the price goes below the $6300 level.

If you can remember my analysis from Monday I have pointed out two scenarios a bearish one and a bullish one, and I believe that the bearish one is in play but I will not make it my primary projection until a proper confirmation

The price of Wanchain has been in bearish pennant from quite some time now, to be exact from the August 14th low when the price was 996 Satoshi which was the all-time low since the coin hit the market on Binance.

As you can see from 4-hour chart the price has broken out off of the minor symmetrical triangle and has found support on the descending triangle of a higher degree. As the Elliott Wave correction count suggests either this was a WXY correction inside a symmetrical triangle and a breakout already happened which is why this current down move is impulsive wave 1, or the correction is extended by two more waves. In both cases I would be expecting that the price reaches its all-time low again and potentially going even below it.

From yesterday’s high the price of Binance BNB coin in relation to Bitcoin has fallen by 2% and is currently being traded at around 0.01445.

As you can see from the 4-hour chart, the price has interacted with one of the most significant levels which is the baseline support from this entire structure and as you can see since the price broke out from the last triangle above it went on to create the all-time high. Another horizontal support level is below at 0.001418 after which I would say that a breakout occurred but for now, it looks like the price is putting pressure on the current horizontal level so another downfall to the next in line is a high possibility.

Binance coin is in a bearish sentiment.

The market looks bearish in sentiment overall and with a straight downfall we have seen in the short period of time more downside is expected in the upcoming period for the cryptocurrency market.