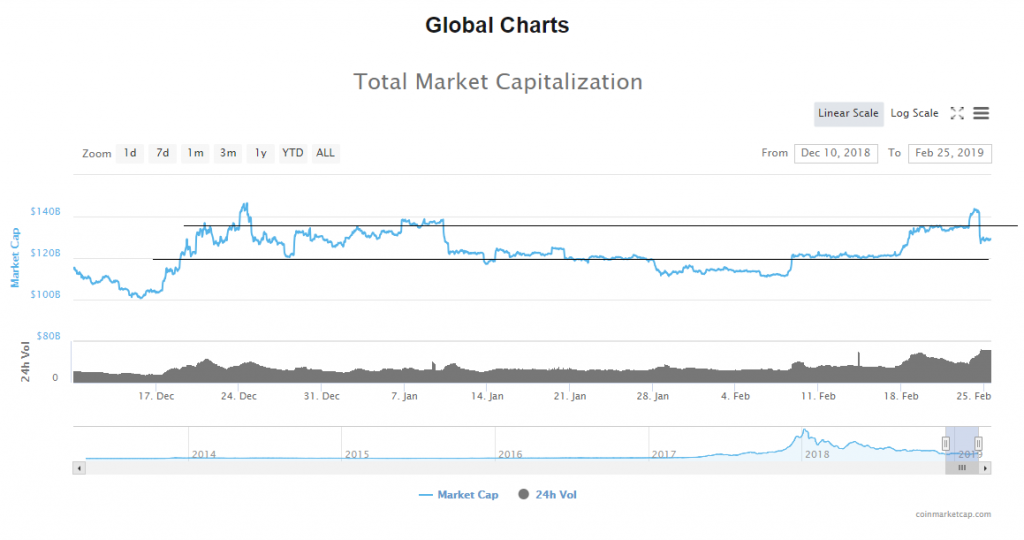 Over the weekend the evaluation of the cryptocurrency market cap has increased at first coming from around $133B on Friday to $143,979,000,000 at its highest point yesterday, but since the evaluation came to those levels it started falling fast as it came down to around $127B at its lowest point today in a matter of hours.

On the global chart, you can see that the evaluation is back inside the territory of the prior horizontal range from it broke out on yesterday’s increase hovering around mid-range. Currently, the evaluation is consolidating as it’s been around the same levels forming a lower leg from where most likely another decrease is to occur.

The market is in red today with an average percentage of change among top 100 coins in the last 24 hours ranging from 4.48%-7.22%. The biggest losers are in double digits like for example EOS which lost its value by 12.53% and Aurora with a decrease of 14.82%.

Bitcoin’s market dominance has been increasing consequently as it came from 51.25% to 52.46% at its highest point today. 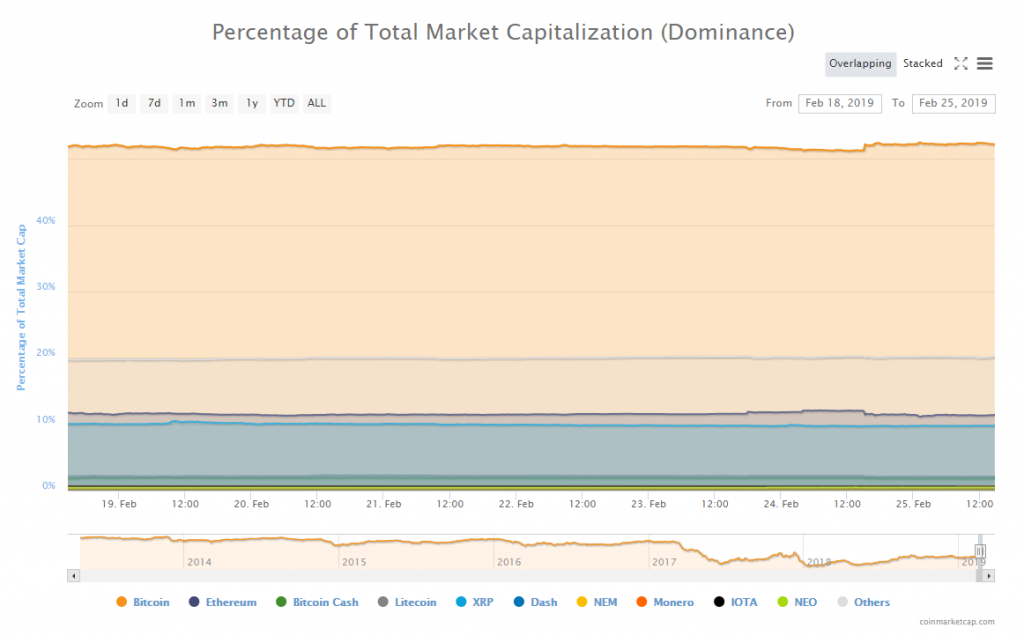 From Friday’s low at around $3994.4 the price of bitcoin has increased at first as it came up to $4277 at first but since the increase was made the price started falling down fast and came to $3817 at its lowest point today which was a decrease of 10.85%.

Looking at the hourly chart, you can see that the price came to my target area of around $4300 where the horizontal support zone is serving as resistance on the 5th wave to the upside which is why this downfall was expected to develop. Currently, the price is hovering around the most significant support line which is the baseline support from the start of the bear market and was serving as strong resistance on the way up, but the momentum was there in order for the price to go past it.

Now that the price has started falling again it is again serving as support but since the level was broken on the way up without any hesitations and rejections – pushing the price for a retracement, it probably won’t hold as support for much longer especially considering the momentum shown by the sellers’.

The price action formed what is known as a lower leg and it usually indicates consolidation before a trend continuation which is why now especially considering that the Intermediate Y wave ended we are most likely to see more downside for the price of Bitcoin with news lows ahead as this recovery was only correctional according to my count which got validated numerous times.

We could see the Intermediate WXY correction prolongation which would result in further sideways movement with a potential of another increase on the Z wave, but considering the momentum shown by the sellers,’ it has most likely ended in which case we are seeing the start of an impulsive move to the downside as a trend continuation.