From Friday’s open when the evaluation of the cryptocurrency market capitalization has at around $187B the market has depreciated in evaluation by around $15B measured to the current levels. This marked the end of my projection from June 6th when I projected that the evaluation is heading toward the $250B area from around $345B and then create a lower high from which the evaluation will fall to the $177B area which is exactly what happened.

This is the referred projection which was also posted on this website in a separate Bitcoin analysis.

As you can see from the current global chart I have missed my targets but a small percentage but the overall context was spot on. 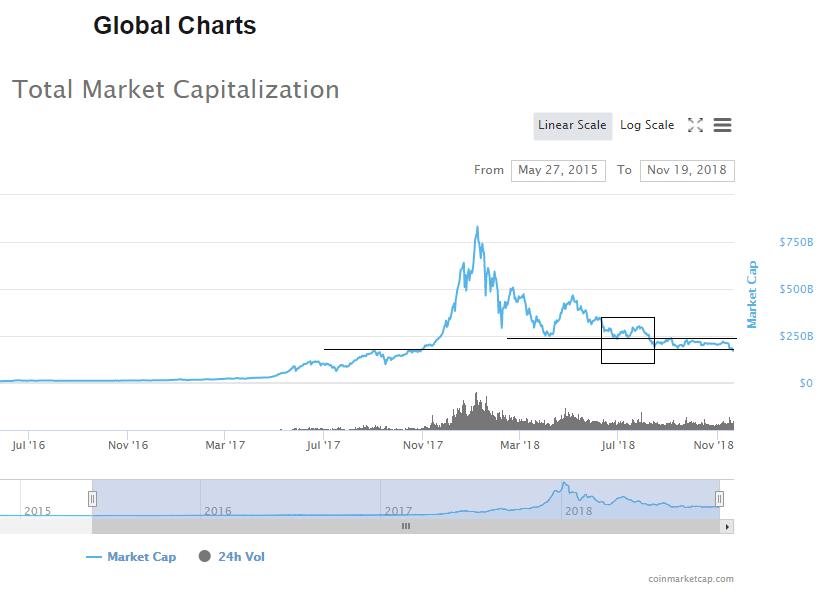 As you can see the evaluation has fallen from those levels to around $250B were some support has been found but the evaluation recovered lower than I have projected from where a breakout occurred to the downside on to the $177B area and has currently broken that horizontal support level as well and is below it.

Bitcoin’s market dominance it has been increasing in the previous period as the confidence in the market diminishes coming from 51.29% on November 6th to 53.5% today. 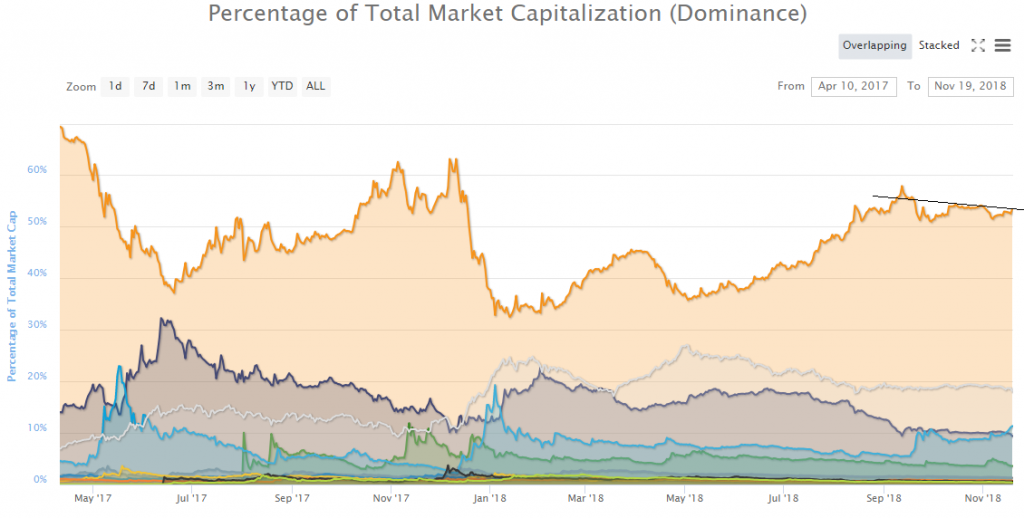 Back when I made those projections I figured that in order for the entire market cap to be around $177B the price of Bitcoin would be around $4700 which was my long awaited target.

Looking at the BTC/USD daily chart you can see why I have projected that the price goes to $4700 – its the next horizontal support level strong enough to hold the momentum behind the sell of and the first awaited target since.

$4700 area is also the intersection between the horizontal support level and the descending structure’s support line and I believe that the price will interact with the mentioned area before we can see some short-term recovery. From last Monday, November 13th the price of Bitcoin has fallen by 19.53% from its high at $6499 to the current levels $5233.

Zooming into the hourly chart you can see that the price has created a bearish pennant from which the price continued its movement to the downside like it was supposed to.

The current move looks three wave-ish so again by projecting the length of the prior move on to the apex from the bearish pennant we get $4700 target.

If you remember from last weeks BTC analysis this was my bearish scenario for this correction and it looks like the Z wave is going to end soon as the move to the $6600 area was only a second corrective wave X. This means that after the correction end I would be expecting some short-term recovery but to how much we are just going to have to see. I doubt that we are going to see Bitcoin beyond $7500 any time soon, but a wave up to $8400 and then more downside below the $4700 wouldn’t surprise me.

I believe that $4700 will serve as a must buy price and as soon as people see Bitcoin below 5K they’ll start buying just because ‘it’s so cheap that I have to buy it’. This will cause another unsustainable pump leading some to believe that the market has bottomed out and another bull run is coming but that will not be the case as those that rushed in due to fomo will find strong resistance above and as soon as they realize once again that a bull run isn’t coming another collapse will occur just like this one.