From yesterday things haven’t changed much for the cryptocurrency market capitalization as the evaluation is currently around the same levels as on yesterdays open which is around $135,5B. There were, of course, some movements to the downside followed by some increase but for the most part, the evaluation is hovering around the mentioned level.

Looking at the global chart we can see that the evaluation has been trying to go past the horizontal resistance which was interacted with on 6th but after it came up to it, it got rejected again on two occasions today. The upward pressure might not be enough for the breakout on the upside so the exhaustion may lead up to the further decline of the cryptocurrency market. 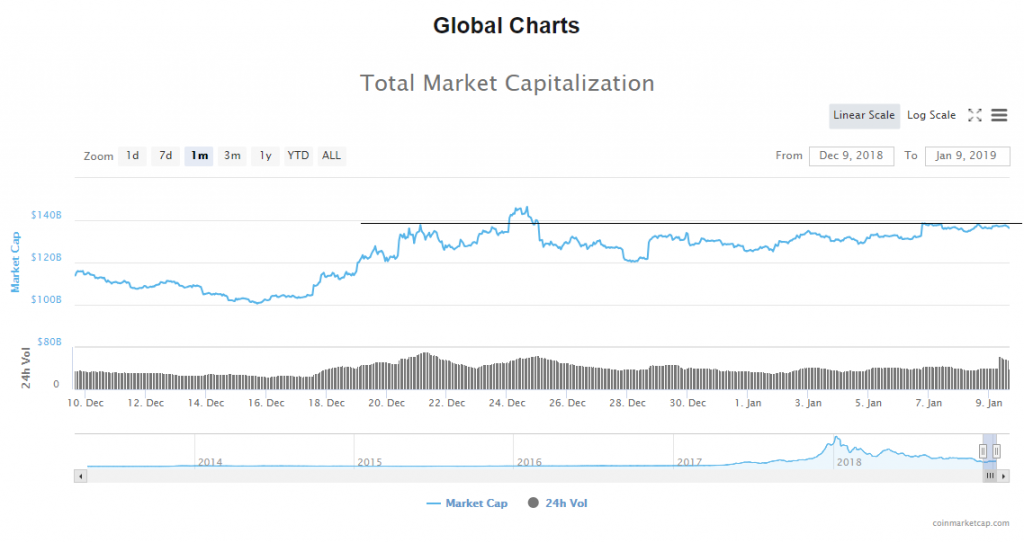 Today the market is showing mixed colors but has been mostly in red with an average percentage of change in the last 24 hours, among the top 100 coins ranging around 1.2-2%. The biggest losers are Buggyra Coin Zero with a decrease of 11.23% followed by Dentacoin with a decrease of 12.57%. The biggest gainers are in double digits as well as Aurora with an increase of 14%, Pundi X with 11.22% and Mixin with 10%.

Bitcoin’s market dominance has decreased as it reached its lowest point today at 51.52% but is now starting to increase again and is evaluation is currently slightly above 51.6%. 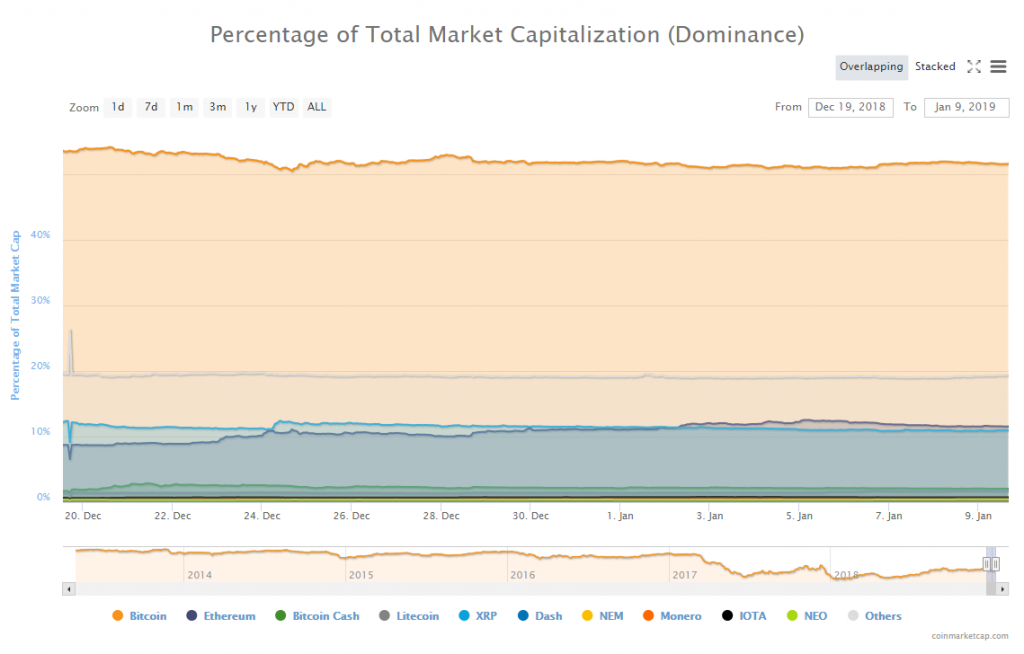 Looking at the hourly chart you can see that the price went in a downward trajectory since it interacted with the ascending channels resistance line and is heading down to the horizontal support at around $4000. The wick from the downside indicates that the price wanted to go and establish support and it did on the next horizontal level (purple line) at $4080 which was the prior two highs ending point.

The price went below it and is currently recovering but since it is retesting the horizontal resistance at $4080 from the upside we are soon going to see a rejection or another increase that would lead the price to go back up above it. The RSI is showing signs of weakness as it went to its lower boarded and was 29.7% on the previous red candle, but has now recovered and is at 37.68%.

As expected the price action is likely developing the second X wave so after some minor support is established I would be expecting another increase, optimally to the bold black line for a second interaction or even slightly above it to the levels of the ending point of the prior increase which is around $4367.

When this increase is completed more downside would be expected a breakout from the current ascending channel and the horizontal levels that are currently supporting the price.

On the hourly chart, you can see that the price action created a symmetrical triangle after an exponential increase of 202% which indicates consolidation. The price is currently on the triangles support line so from here I would expect a bounce off of the support line and a further increase. As the price is below the horizontal resistance level at $166.4 that would be its first resistance point but since it hadn’t held the price that respectively, I don’t believe that it will serve as strong resistance now.

As you can see from my Elliott Wave count the current structure is most likely and abcde but I have labeled it as the X wave from a Minute WXY correction in the opposite direction. The expected increase would be the same length as the W wave so the price could optimally end on the next resistance zone around $182.

After the move to the upside has completed a move to the downside is to be expected because the Y wave ends on the upper level so a trend continuation or at least another correction should be expected.

Bitcoin Cash is in the sell zone.