From yesterday’s high at $219,484,000,000 the evaluation of the cryptocurrency market capitalization has decreased by 18 billion dollars to its lowest point today of $200,7B. The period of low volatility has ended on a sharp drop-off that is set to trigger those massive moves that were expected as a result of a breakout from the triangle seen on the global chart. 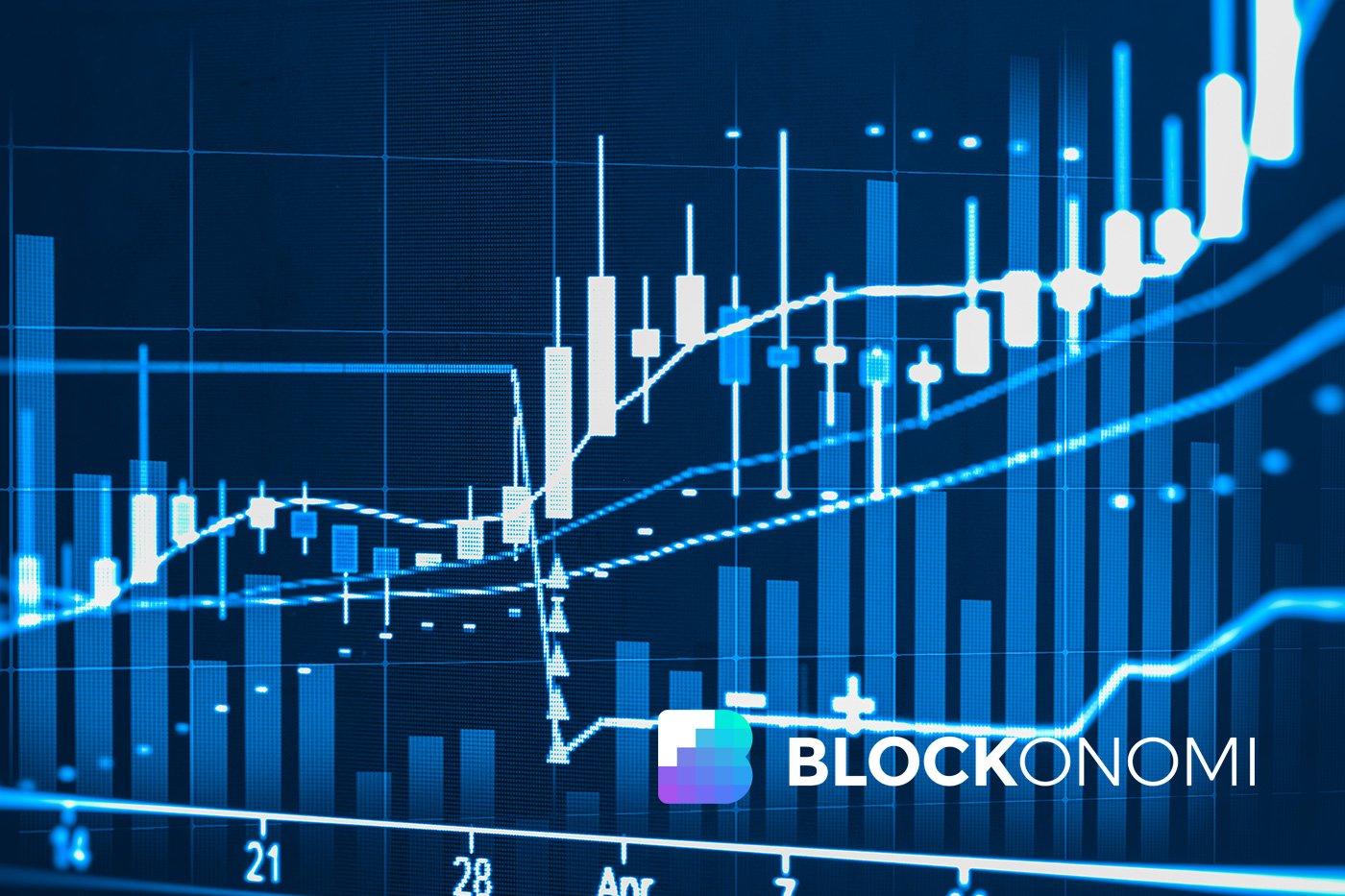 As you can see from the global chart above the evaluation broke every uptrend support and is now back on the levels from which the attempt was made to break the resistance at around $224B. Consequently, the market is in red with an average percentage of change among top 100 coins ranging from 8-11%. 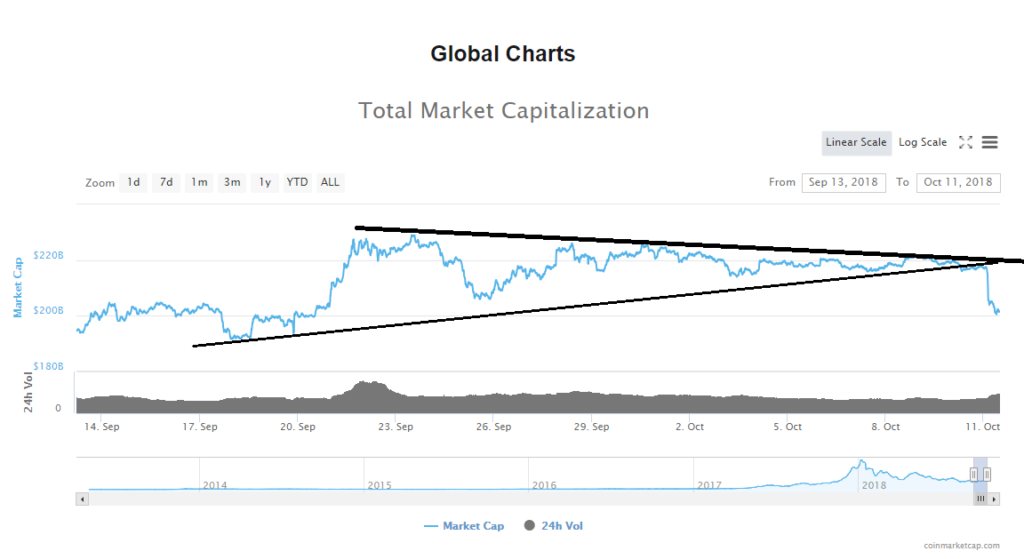 Bitcoins dominance is increasing again and is currently hovering around 54%. If you remember I said many times that the Bitcoin’s market dominance is to be viewed as an inverse indicator regarding the market trend. In one of my analysis, I have spotted an Elliott Wave count and stated that I would be expecting the Bitcoin’s dominance to go up to 68% as the 5 wave ends. 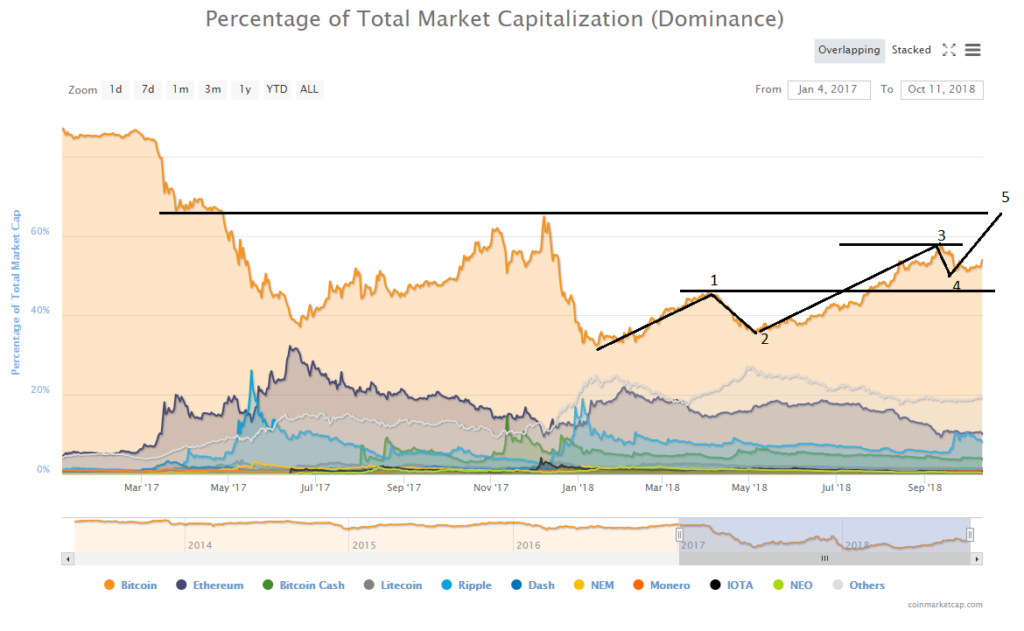 The problem is that this upward trajectory could only be a correctional one and the evaluation decreases all the way to 44% where the wave 1 high is before it goes up again surpassing the prior high.

There aren’t any significant headlines pushing the market at the moment.

From yesterday’s high at $6641 the price of Bitcoin has dipped to $6250 and has been consolidating since reaching $6300 at the moment.

Looking at the 4-hour chart you can see that both triangles (descending one- red, symmetrical – dotted line) supports have been broken with the horizontal support level at $6516 in the process. As you can see this isn’t the first time the price has dipped below the symmetrical triangle’s support line meaning that this could mean anything and could only be a wick on a higher time-frame. Looking at this chart I see just one level strong enough to hold the momentum and that is my target from June which is around $4700 were the downtrend baseline support is intersecting the horizontal support level.

Having projected this corrective count as WXYXZ in June it is interesting to see how the following wave structure is playing out. I have projected that after the Z wave ends another ABC three wave move to the downside will occur and so far two waves have developed and the third to the downside is starting to.

Zooming into the hourly chart we can see that the momentum behind the sell-off is strong judging by this last red candle. This could only end as a fakeout but it is highly unlikely. 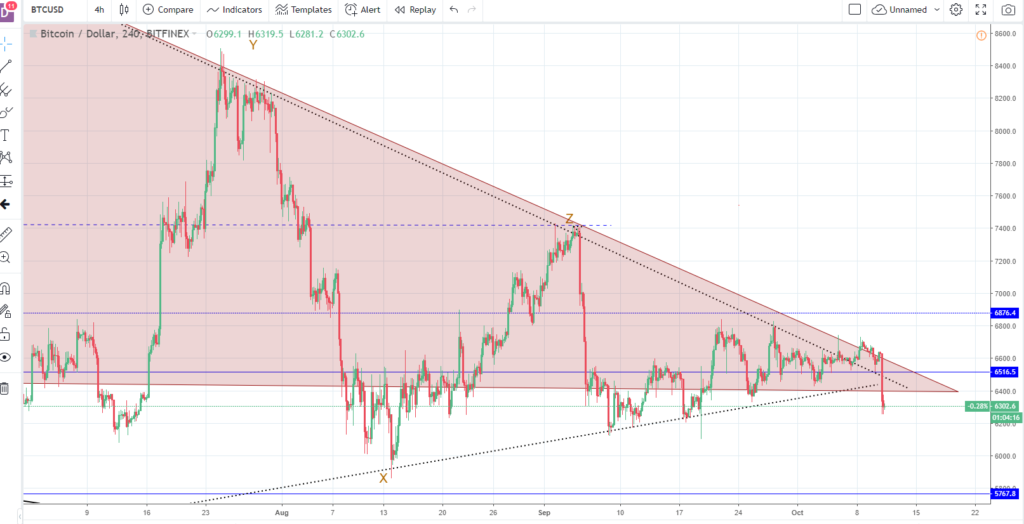 As you can see the last time price dipped below the symmetrical triangle’s line another same length green candle appeared pushing the price back inside the triangle once again.

This time that didn’t happen, instead we are seeing that the price is now steadily going lower with every hour putting a lot of selling pressure on the $6300 level.

Zooming further onto the 15 min time frame you can see that the price action has formed a bearish pennant which is known to be a trend continuation pattern, indicating consolidation before another shart drop in price.

The price may recover from here much as it did on the April’s short-squeeze when the bearish pennant was broken from the upside and the price went on to recover significantly but has still resulted in a lower low which is the expected scenario. 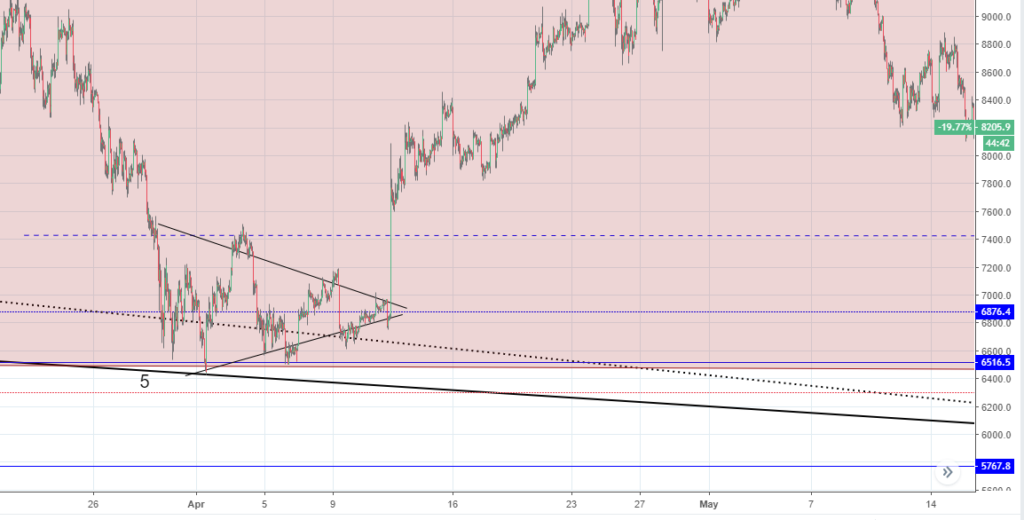 The target for the bearish pennant is calculated as the length from the first part of the move projected from the apex of the triangle and that brings a target of $5700 which is around the first wave X seen on the 4-hour chart and the horizontal support level that hasn’t been surpassed by the price so far and it is highly likely that this time an attempt will be made.