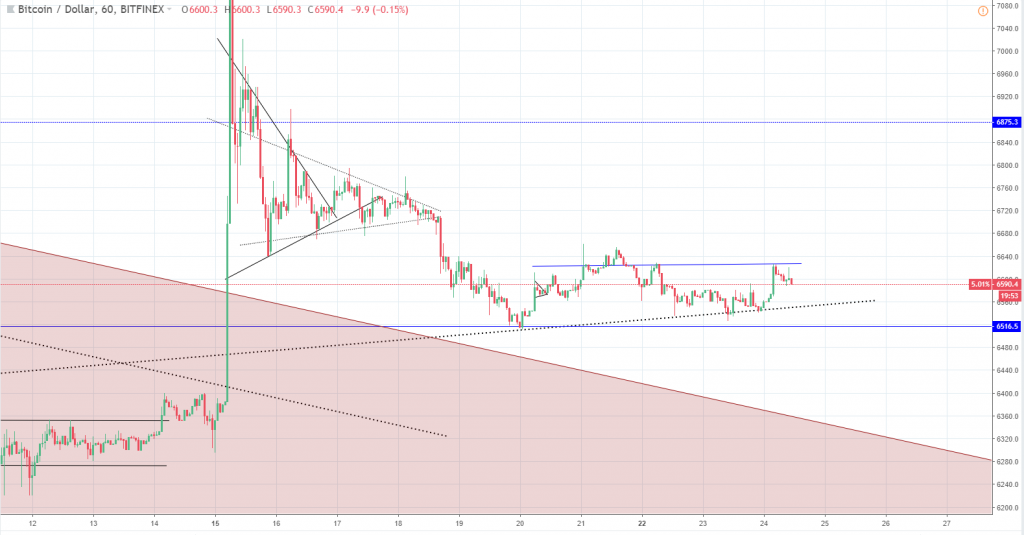 From yesterday the evaluation of the cryptocurrency market capitalization has went from $209.3B to $207.6B at its lowest and from there went to increase to $211,22B today, but has retraced since by approximately 1 billion dollars.

Looking at the global chart we can see that the price is still in a range formed after the last Monday’s spike up and has interacted with its resistance level today. As the evaluation is showing signs of a rejection by the range resistance it is likely heading down now to its support line. How many more bounces there is before a breakout we are yet to see but judging by the narrowness a breakout is near.

Bitcoin’s market dominance has been hovering steadily as well and is around 53.7% from 11th of October. 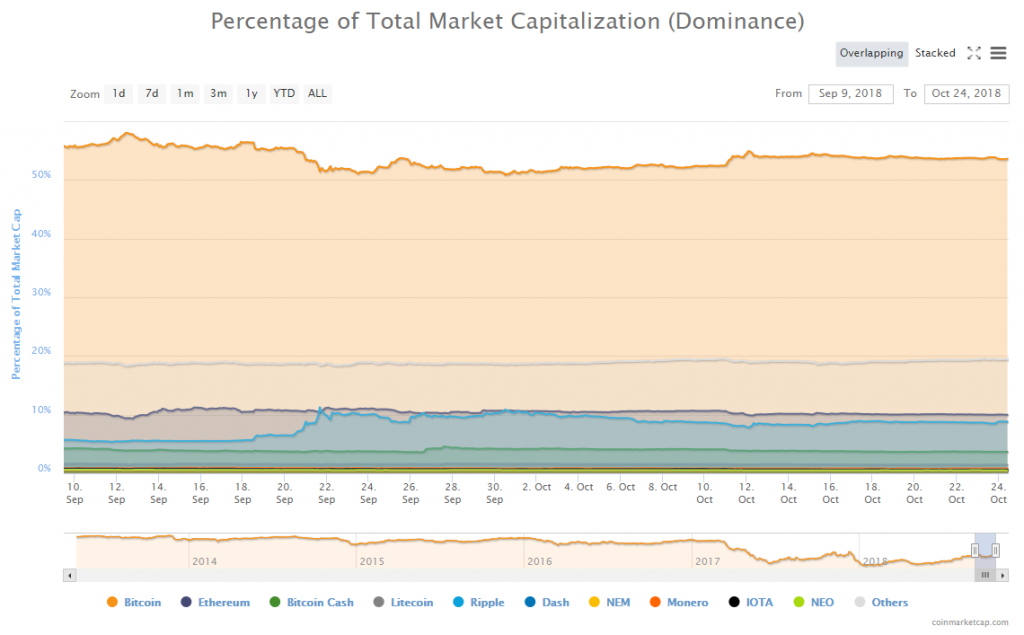 From yesterday’s low at $6536 the price of Bitcoin has increased to $6624 at its highest point today but has pulled back since and is now trading at $6590.

Looking at the hourly chart we can see that yesterday’s low was on the symmetrical triangle’s support line with which the price interacted one more time before reaching the high. Today’s high is slightly lower than the prior one but we might see another increase further up as this down move could only be corrective before a higher high is to be made. I believe that the price is heading down towards the symmetrical triangles support line again because it goes rejected by the minor range resistance and it now needs to find support. It wouldn’t surprise me if the price looks for support on the horizontal level around $6516.

Zooming into the 30 min time frame and looking at the current wave structure I believe that the following scenario will occur. 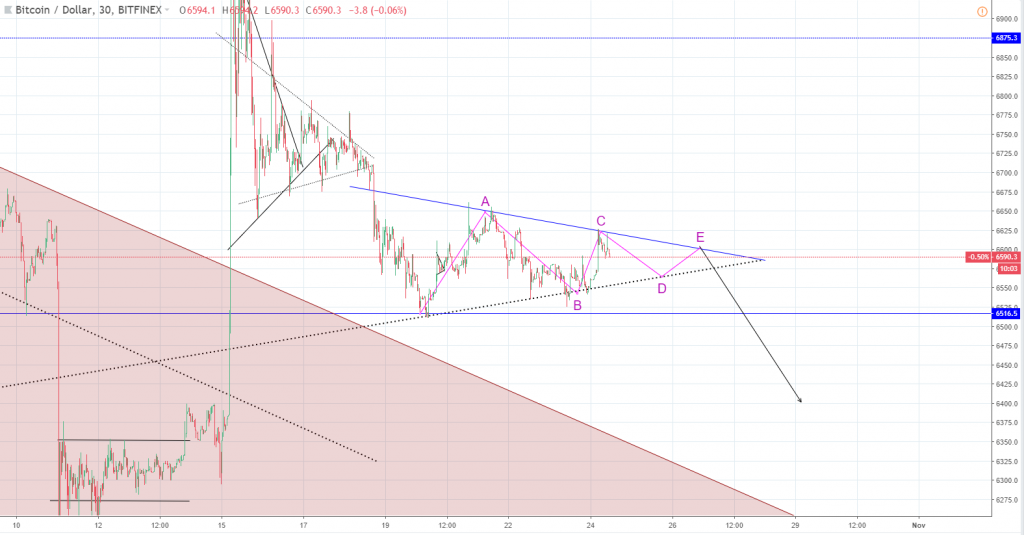 As you can see after a breakout from the minor symmetrical triangle which invalidated a bull flag the price dropped significantly – from $6710 to $6516 which is a 2.89% decrease. Following the decrease, another triangle looks like its forming in which the price is consolidating, so after it ends I would be expecting a breakout to the downside. This current structure might end as another correction that pushes the price higher at first but ends like I have projected it to.

From yesterday when the price of Monero was $106 the cryptocurrency has increased by 3.62% and is currently trading at $110. 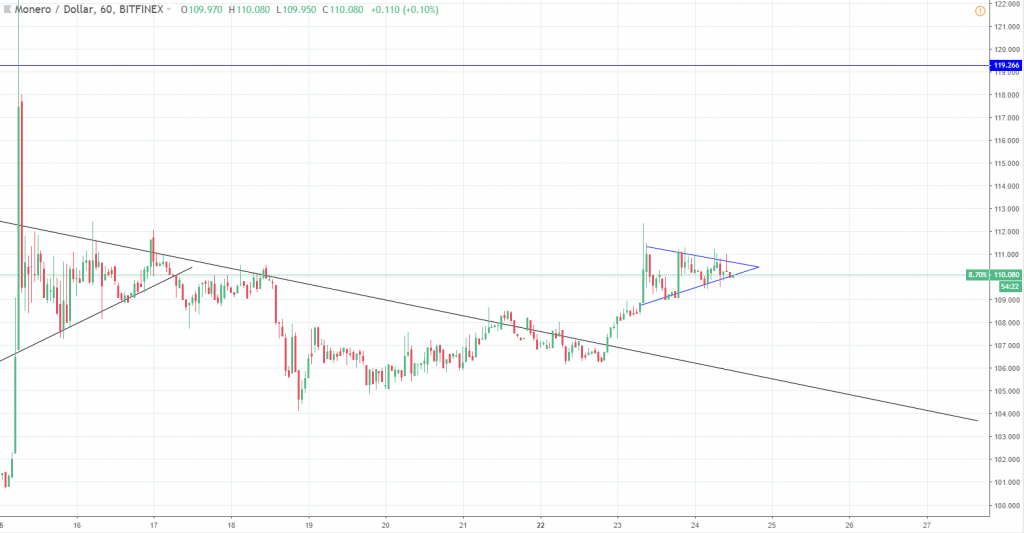 Looking at the hourly chart we can see that unlike the price of Bitcoin, the price of Monero has created a higher high breaking the downtrends resistance line and has currently formed a consolidative triangle and judging by the steepness of the significant levels the buyers are more aggressive at this moment which indicates that the price is likely heading further up after a breakout.

Zooming out to the 4-hour chart you can see that the price of Monero has been in a tough spot since the breakout from the falling wedge pattern was made as the price struggles to keep up with the upward trajectory.

You can see that an ascending channel lead the price to escape the wedge but the channel has been intersected with another descending pattern which pushed the price back to create lower lows after a breakout.

A triangle seen on the hourly chart is above the referred descending pattern so if the price goes further up the pattern would be overruled for now.

Monero is in the neutral zone as indicated by the hourly chart technicals which is in line with what the price action indicates. 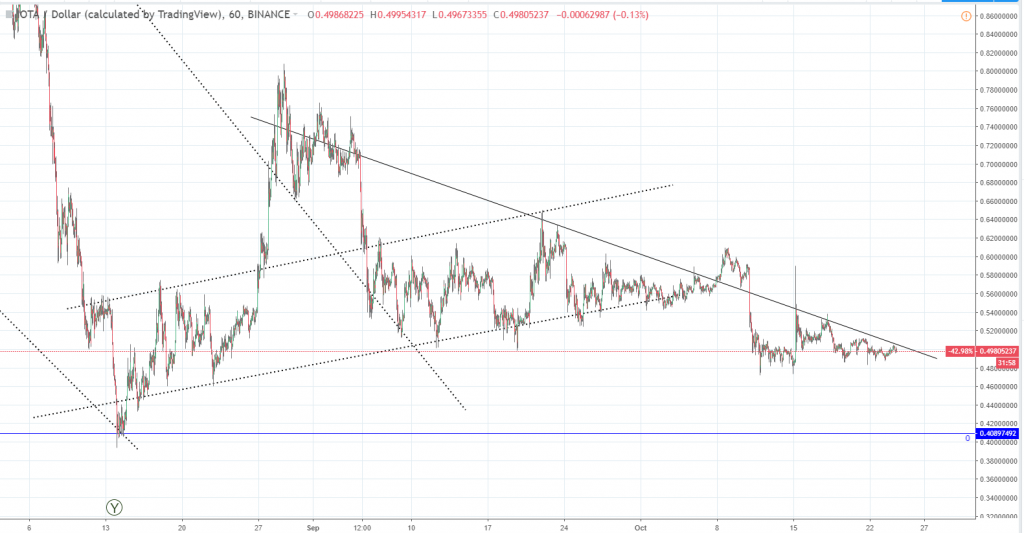 On the hourly chart, we can see that the price is struggling to keep up the breakout momentum from the falling wedge similarly to the Monero chart a downtrend overruled the ascending channel and pushed the price almost back to form was the increase started. As you can see the price did go beyond the downtrends line but has failed to stay above, dropping significantly (massive red candles) every time. Currently, the price is close to it again so we are likely going to see another rejection soon or another increase above it before another fall. If that happens I would be looking at the next horizontal support level for a target of around $0.4

MIOTA is in the sell zone.

The market is currently showing sideways movement like I said in yesterday’s update that it might which may lead up to some short-term increase but as the charts of the major cryptos covered in today’s update are pointing out more downside is to be expected.