Black Mirror: 1984-Like Authoritarian Blockchains are a Real Thing 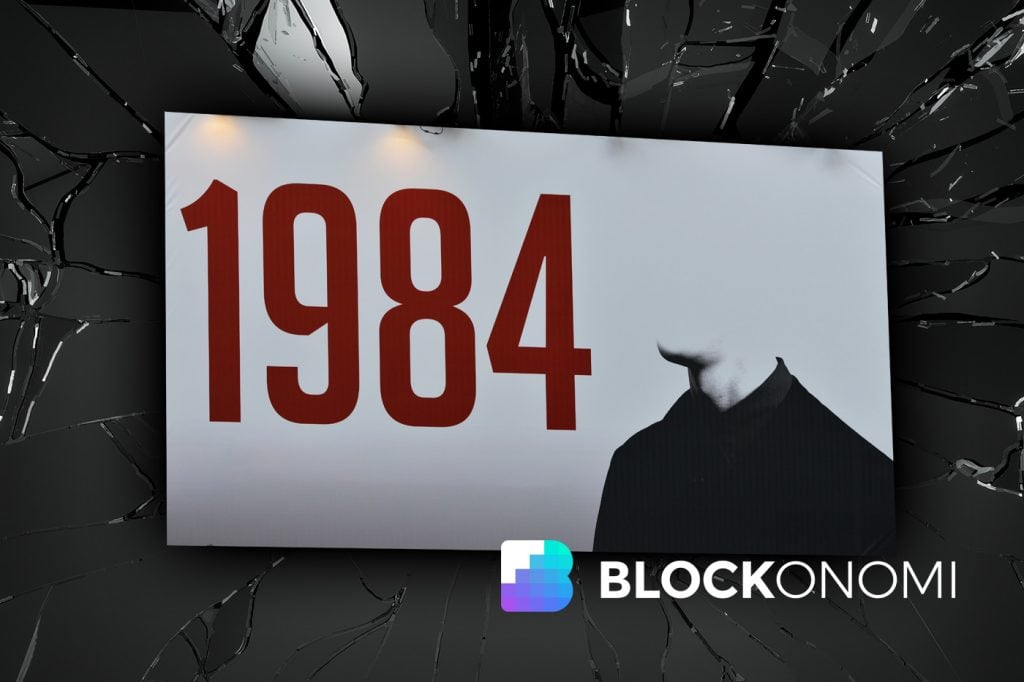 Welcome to the future. The year is [insert date distant enough to be plausible, yet near enough to be worrisome]. The barista hands you your coffee and you walk out the door. No need to pay manually—the facial recognition system has already subtracted the correct amount of cryptocurrency from your PersonalCoin account.

Yeah, the future is pretty nice!

The next stop is renewing your government ID at the local security branch. It only takes a few seconds to check your fingerprints, criminal record, address, and other personal details, all stored securely on the CitizenChain.

No paperwork necessary. Your changes of address, employment status, travel, and Hulazonflix viewing history all get updated in real time, and since no security guards have turned up you figure your behavioral patterns haven’t triggered any smart contracts that would raise an enhanced screening alert.

The system deducts the renewal fee from your StateCoin balance and you’re free to go. On the way home, you’re careful not to jaywalk—your Civility score is still recovering from that time you accidentally parked a bicycle in a designated scooter space, and you don’t want your transportation privileges knocked down another tier.

It’s not that I’m blaming blockchains for potentially ushering in a dystopian future; it’s just that the road to serfdom is material-agnostic and can be paved with pretty much anything.

There’s a justifiable amount of excitement around blockchain tech, as it’s decentralized, transparent, secure, and resilient, and it can be a fantastic tool for distributing power and fighting censorship.

Hopefully, the applications will skew towards the positive, but taking a peek at the darkest timeline is something that advocates of any new technology should do every now and then, if only to remind us what we need to avoid.

So here’s the blockchain Black Mirror update: dictators are issuing cryptocurrencies, China is exploring national ID blockchains (among others) and a social credit score system, and a lot of the corporations doing blockchain research actively make money off your data.

Governments that issue or endorse a cryptocurrency as legal tender aren’t likely to make it decentralized or private.

Done well, a CBDC (Central Bank-issued Digital Currency) could be more efficient, secure, and flexible than current financial systems, but it’s doubtful that most governments would resist the temptation to create something that they would be able to control even more tightly than their fiat currency. Just look at the first two countries to actually issue a cryptocurrency:

This isn’t saying that cryptocurrency could never work on a national level—just that any serious government implementation is likely to be highly traceable and include backdoors.

As a way to digitize public assets and conduct government-related business, a transparent cryptocurrency could be great, but the dystopian potential of a cash supply that governments can control and track in real time is pretty clear.

Russia and China have both made occasional noises about possibly creating their own state-backed cryptocurrencies as well, and especially given China’s strong regulatory environment and punishing capital controls, it’s pretty likely that the results would have some severe privacy issues.

Even countries with good rule of law and citizen protections wouldn’t be exempt here—the Five Eyes is composed entirely of strong liberal democracies, after all. Something like marijuana, currently legal on the US state level and illegal on the US federal level, might run into problems with a centrally-controlled digital currency.

Is it that much of a leap to imagine a national cryptocurrency with built-in controls on where it can be spent and which currencies it can be exchanged into?

I’ll just come right out and say it: China is an authoritarian surveillance state with a thriving (if highly-regulated) crypto scene, and they’re definitely going to use blockchain to track and control people.

They’re currently trialing social credit systems (electronic logs of citizen behavior that can lead to reward or punishment), are leaders in AI facial recognition and other civilian surveillance tactics, have their internet locked down, and aren’t known for their human rights record or respecting their citizens’ privacy.

One Chinese social insurance project, “THEKEY,” is already drawing hundreds of millions of peoples’ personal data (government-related, biometric, even behavioral) from government databases into its own blockchain (built on NEO), and that number is only likely to grow. Combine real-time surveillance with smart contracts connected to the ID blockchain and you’re looking at a pretty effective means of tracking and enforcement.

China has also already implemented a parolee-tracking system in several cities, and there’s been noise about a government-backed crypto-renminbi for quite some time.

The National Audit Office is considering a blockchain solution, it might help detect tax fraud in Shenzhen, and it’s the number one country in the world for blockchain patents.

Meanwhile, official government statements have explicitly said that decentralization is not an aspect of blockchain that China appreciates.  The PRC taught us that the internet doesn’t have to be free, and they’re likely to drive the same lesson home about blockchains and crypto.

Currently, they’re the only place that’s working on this at any serious scale, but that’s 1.4 billion people ruled by a government that is actively trying to expand its sphere of influence and export its methods of social control.

They’re not the only ones playing this game, either: India implemented nationwide biometric IDs, Singapore is putting facial recognition on lampposts, and the US is probably still developing surveillance tools that can see pretty much everything about your electronic activity.

Notably, none of those last three directly involve blockchains—it’s not like they were the missing link and now that they’re here governments are suddenly free to pursue their authoritarian dreams.

It’s just one of those things that will probably make mass surveillance a little easier, the same way pretty much every other information technology already has.

Again, though, there’s a qualifier: identity blockchains can be great. There are tons of ideas out there about using encryption, zero-knowledge proofs, and other methods to help people maintain ownership of their data.

Well-implemented, this would be a huge improvement over many of our current systems. There’s just not as much weight behind that type of system as there is behind China’s need to keep tight control over 1/6 of the world’s population, though.

Corporate blockchains: not ideal, but not that bad either

The FAANG (Facebook, Amazon, Apple, Netflix, and Google) companies and those like them are unquestionably wonders of the modern world. But that doesn’t mean we have to like everything about them—particularly the troves of data many of them gather on their users.

Again, this works pretty well with conventional database technologies and blockchain probably isn’t making things much worse. Still, let’s say your behavior is tracked, stored, and linked to smart contracts, with other pieces of information gradually trickling in to make that hole in the internet look increasingly like you.

The data brokers that already deal in user information will probably get an efficiency boost, enabling real-time micropayments in return for data.

As much as we don’t like to believe it, the more a company knows about us the better they can manipulate us. Maybe we can’t be reduced entirely to neurochemical triggers, but we can’t pretend they don’t exist.

Imagine your user data one day gets linked to that DNA test you took (or your family member took) without reading the fine print. It would probably yield fantastically interesting results for science, and maybe, just maybe, some effective ways to prod you into buying new stuff.

Big banks and big tech are two of the main corporate blockchain adopters, and while blockchain could help put them on the right track as far as data protection and transparency goes, are the incentives really aligned for that?

I get the feeling Facebook wouldn’t have taken quite so many steps to separate itself from Libra if they weren’t the poster-child for user-data misuse.

Worst-case scenario: corporate blockchains are just a more efficient way to collect and exploit vast amounts of information about people.

Darkest corporate timeline notwithstanding, though, companies are probably the least concerning category of potential blockchain-villains.  As with everything, they’ll inevitably make mistakes and act against user interests on occasion, but faced with public pressure and at least some need to stay trustworthy, a lot of them could very well go the other direction and implement blockchain solutions that improve user privacy and control.

Projects like Basic Attention Token are already looking to make advertising less intrusive, for example, and the beauty of industry (versus government) is that there’s generally at least a possibility of a competitor out-innovating you and taking your place.

The future doesn’t depend on blockchain; blockchain depends on the future

Saying that blockchain tech enables a trustless economy and transparent governments, is like saying that the Internet promotes free and democratic civil discourse.

It can do that, and it does do that, but it also does very much the opposite of that, and some people are working very hard to build versions of it that eliminate the original vision altogether. That’s going to happen regardless of the systems we build, so sometimes it’s good to take a step back from the technology and ask “What kind of world would use these tools well? Which institutions should we be trying to strengthen?”

Those are big questions that tend to draw some pretty polarized responses, but staying critical, updating our priors, and getting a little loud when we see something going wrong is how we make intellectual and social progress.

Facebook’s data policies notwithstanding, they at least seem to have internalized public opinion to the extent that they made some actual good calls with their cryptocurrency, which is at least a partial victory for people who make a fuss about that sort of thing.

New technologies don’t exist in a vacuum—they both shape and are shaped by external forces, and that relationship is where things can really start to go wrong. Remaining aware of how blockchain and crypto are being misused is vital so we can find ways to strengthen alternative platforms and institutions.