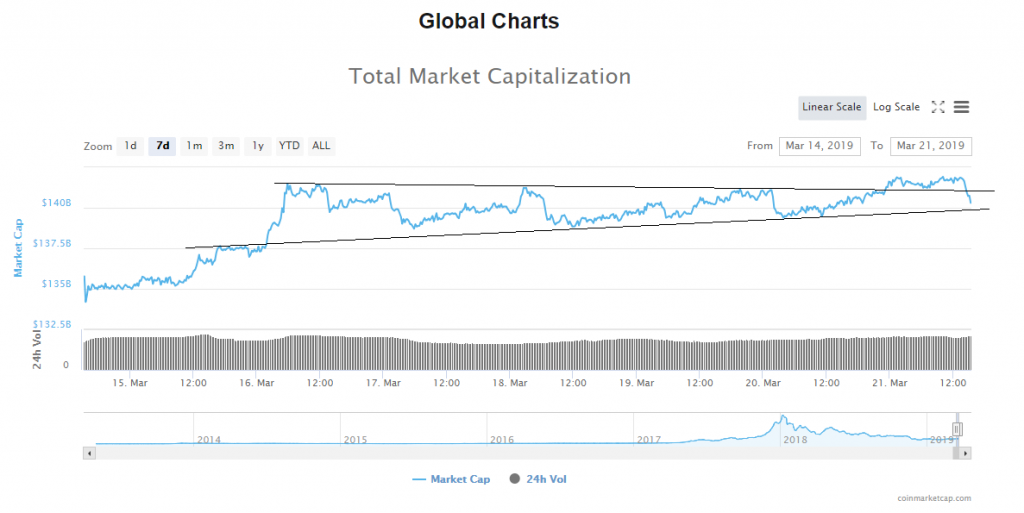 The evaluation came up again to around $141,8B levels in another attempt to break the encountered resistance, but the attempt ended as a harder rejection causing the evaluation to once again starts moving to the downside and is currently in a downward trajectory sitting at around $139,973,087,816.

On the global chart, we can see that the evaluation at first started to break out from the descending resistance level but it ended as a fakeout after all as its again back inside the territory of the corrective structure. Today we are most likely to see further downside for interaction with some of the support levels for the establishment of support since the interaction with the resistance levels ended as a rejection.

The market is in mixed colors with an average percentage of change among top 100 coins in the last 24 hours ranging around 1.3-1.8%. The biggest movers are in green with double-digit gains like Ravencoin with an increase of over 16%, Maximine Coin with 15.6% and MOAC with an increase of 11.85%.

Bitcoin’s market dominance has been increasing and is currently sitting at 51.2% coming from 50.76% at its lowest point yesterday.

On yesterday’s lowest the price of Bitcoin was $4060 from where the price increased at first by 1.89% coming to $4136 at its highest point.

Looking at the hourly chart, you can see that after the interaction with the 0.786 the price formed a cluster below it, and as the 5th wave ended around the vicinity of the 3rd wave’s ending point a move to the downside was expected.

While writing today report the price started decreasing and not before long the price came down to my target level and is currently sitting at $4006 and is again inside the territory of the falling wedge as it got below its resistance level close to the significant horizontal level at $3994.4

As the 5th Minuette wave ended so did the C wave of the three wave ABC correction to the upside which means that now we are most likely seeing the start of the expected move to the downside either in a form of the 3rd impulse wave of a higher degree or the third consecutive Minute ABC correction to the downside after the price of Bitcoin ended its impulsive five-wave increase to $4267.

Now that it has ended an impulsive move to the downside started as the price of Bitcoin decreased by 2.92% in a matter of hours, whipping out all the recovery made from yesterday.

The second correction ended slightly lower than its previous impulsive move to the upside’s ending point like it did after the Intermediate W wave ended which could again indicate the validity of the projection, but if we are seeing the development of the third structure to the downside I would expect it to end somewhere around $3644 where the lower ascending trendline is or even lower, if we are seeing the start if impulsive five-wave move.

After the second correction ended after the Intermediate wave W we have seen the Minor Y wave pushing the price down by 17.38%. If we are to see a move to the downside with the same momentum, we will see the price of Bitcoin at around $3417 where the Minor Y wave’s ending point is.

As I don’t believe that the Intermediate WXY correction ended, I think that we are seeing the prolongation of that correction which in that case means that we are seeing the development of the second wave X. If this is true then we are going to see one more attempt for a breakout on the upside from the current horizontal resistance up to $4300 which would end as a rejection with a lower high when the Intermediate wave’s W and Y potentially not maybe exceeding the horizontal resistance level at $3994.4 which depends on the depth of the presumed second wave X ending point so we are yet to see where the price finds support now that it started moving to the downside.

As the price of Bitcoin again came to its most significant resistance point at around $4129 a rejection has been made which propelled the price in a steep downward trajectory falling down to $4004 at its lowest point today which is around 3% drop in a matter of hours.

This could be the early indication of the start of a downtrend which was expected to start after what I’ve been saying was a corrective increase whose purpose was to retest the upper resistance points and trigger another round of selling.