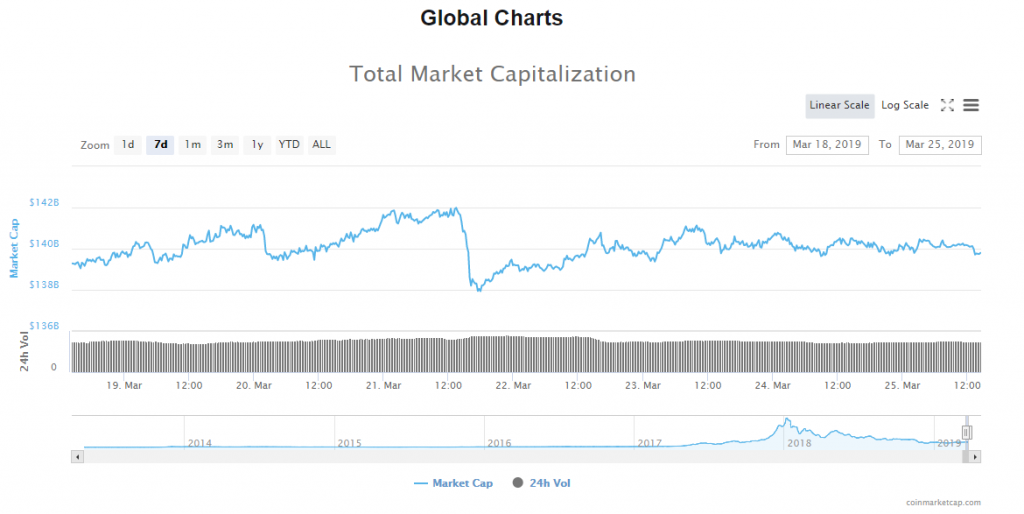 Over the weekend we have seen an increase at first for the evaluation of the cryptocurrency market as the evaluation came up from $139B at Friday’s low to slightly over $141B on Saturday’s high, but since then another minor downtrend started developing and the evaluation came down to $139,770,643,930 at its lowest point today.

On the global chart, we can see that the evaluation moved sideways from Friday after a significant decrease of around 4 billion dollars has been made, which could be interpreted as consolidation before another move to the downside starts.

The market is mixed color today with an insignificant percentage of change in the last 24 hours among the top 100 coins. The biggest movers are in green with double-digit gains among which Maximine Coin is the biggest as it increased in price by over 31%, followed by Bitshares with an increase of 16.58%.

Bitcoin’s market dominance has been increasing from yesterday’s low at 50.48% and is currently sitting at 50.7%.

On Friday the price of Bitcoin was $4035 at its lowest, we have seen an increase to $4082 at its highest point on Saturday from where another minor downtrend has started which caused the price moving to $4010 at its lowest point yesterday but recovered quickly to the levels from which the last downfall was made, leaving a wick on the hourly chart, which indicates buying pressure.

Currently, the cryptocurrency is being traded at $4028.8 and is in a downward trajectory but is now retesting the yesterday’s low level for support.

On the hourly chart, you can see that the price of Bitcoin is retesting the minor horizontal level for support around the vicinity of the A wave’s ending point slightly higher than the horizontal support/resistance at $3994.4 and is still above the falling wedge resistance line.

The ascending trendline from the start of the wave A has been broken last Thursday and was retested on a minor uptrend but since the interaction ended as a rejection, over the weekend we have seen the price starting a minor downtrend.

Now that the price is in a downward trajectory again and is getting close to the weekends low at around $4020 we could expect to see a minor increase like seen until Saturday which would be the 3rd wave out of the correction that started after the initial drop on Thursday which is most likely the first wave of a higher degree five-wave move which would make this expected three-wave move the second.

If the price ended its Minuette 5th wave that would mean that the C wave from the upward correction has ended, but if the 4th wave as a corrective wave got prolonged we are seeing the development of the third correction of a lower degree which is set to retest the support around the vicinity of the 1st wave’s ending point before continuing another increase as the 5th wave should start developing and could come to the ascending triangle’s resistance level at around $4212 before we are to see the start of a move to the downside.

I think that the upswing has ended around the 0.786 Fibonacci level which was retested was interacted with two times after we have seen a rejection as the price fell by around 3% in a matter of hours. As we are most likley seeing the start of the impulsive move to the downside after this sideways movement ends I would be expecting another decrease of a higher momentum then seen on last Thursday which could end around the intersection of the first ascending support line and the 0.618 Fibonacci level at $3936.8 but I would expect further decrease from there after a small correction.

Last Thursday we have seen the price of Bitcoin starting a movement to the downside, which was postponed by the sideways movement we have seen over the weekend which is most likely the second, corrective wave of a higher degree five-wave movement.

This means that we are now seeing the start of the expected downtrend after a correction to the upside which ended around the $4130 level.

If we are seeing the start of the five-wave decrease the price of Bitcoin is set to go down to $3936.8 level around which the first significant support point is, but further downside would be expected from there to the next support point to the downside which is around $3666 where the 0.5 Fibonacci level is.