Yesterday, the cryptocurrency market cap evaluation started off around $137,2B and it came up to $138,617B at its highest point, but from there it started decreasing fast and came down to $121,846B at its lowest point yesterday. On today’s open the evaluation was at $122,7B and it first fell from those levels to $121,898B before going up again to $123,925B which was its highest point today, since it came back down again and is currently around the same levels as on the open.

Today the market is in red with an average percentage of change in the last 24 hours among top 100 coins ranging from 3.47-5.49%. The biggest loser is once again Buggyra Coin Zero with a decrease of 12%, followed by Revain with a decrease of 10.35%. 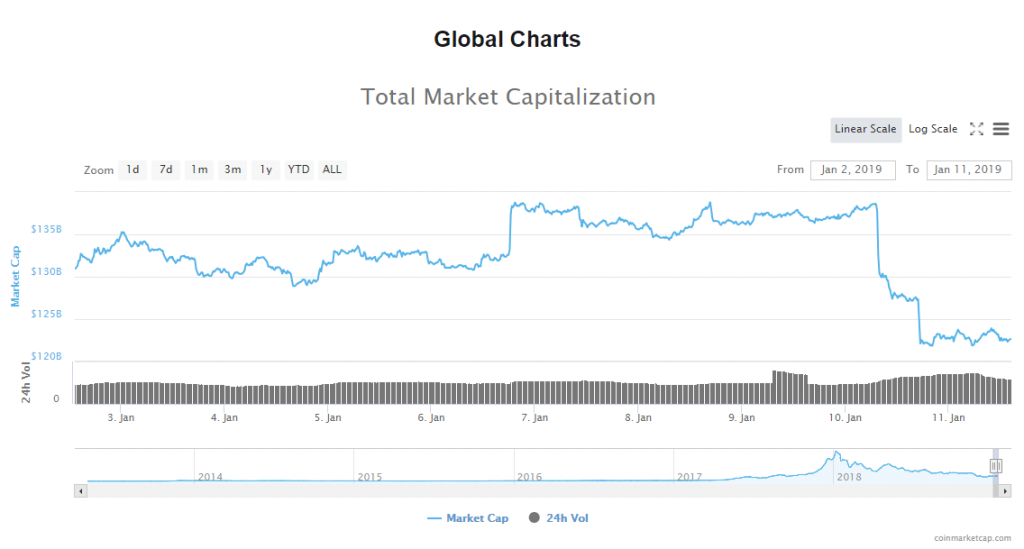 Bitcoin’s market dominance has been increasing and came from 51.4% on yesterday’s open to 52.66% at its highest point today, but is now around 52.4%.

From today’s open at $3731 the price of Bitcoin has fallen at first down to the horizontal support level at $3691 where it interacted with it and found support leaving a small wick on the hourly chart. From there since the price support was established and another increase has been made this time to $3749 and even spiking further up but the hourly candle closed on the mentioned level.

This was a higher high compared to the previous one so then the price went into a downward trajectory and a higher low at $3710 was established, which signals the establishment of the minor uptrend. After going to $3710 the price spiked up again on the current hourly candle and is currently at $3737.6 but went further up to $3754.

On the hourly chart, you can see that the price broke inside the descending channels area which was previously broken out of as an ascending structure pushed the price upward. Now the price has found some support on the minor horizontal level of the t previous retracement’s low where Minute W wave ending point is. It looks like the price is now in an upward trajectory after the interaction with the horizontal level in which case I would now expect it to go to the descending channels resistance line for a retest of resistance which would be at $3768.5.

As this current downside move is the Y wave from the mentioned Minute WXY correction it is likely going to end as a five wave move, in which case this current upside movement would be the 4th corrective wave. In theory, the 4th wave could push the price as high as to the 1st wave ending point, so we might see another increase up to the horizontal resistance at $3994.4 before another low, but I don’t believe that it would.

More likely we are going to see an interaction with the descending channels resistance line which was well respected in the past and needed strong momentum for a breakout in both cases, ending as rejection and a further trend continuation as another low is to be expected.

I have labeled my price pathway prediction with the orange brush but have maintained the initial target at $3580 area. This doesn’t mean that the decline would end there as most likely there is going to be an overreaction followed by an uncertainty period which would be imprinted on the charts as a sideways correction.

Zooming out to the 4-hour chart you can see the higher degree fractal when the price of Bitcoin started a similar impulsive move but on a larger scale and came down from $6488 to $3727.

As you can see the impulsive move was followed by a correction, so the up followed correction could lead the price of Bitcoin further down in which case I would expect it to go to the next horizontal level in line which could serve as support which is at $3540-3450.