Even amid continued uncertainty about the future of the economy, Bitcoin has started to gain strength, rallying as high as $6,850 on Tuesday morning, a whole 80% higher than the $3,800 bottom the cryptocurrency established at the worst of “Black Thursday.”

With this latest move higher, the cryptocurrency is up 25% in the past five trading sessions, outperforming a majority of multi-billion-dollar asset classes in existence.

Bitcoin’s latest bout of strength coincides with the strongest open stocks have seen in weeks, with the Dow Jones Index opening some 7% higher, rallying back to the key price of 20,000 points, seemingly responding to the incoming coronavirus rescue bill from the U.S. government.

The market’s rally also comes after the Federal Reserve — America’s central bank — announced a historic measure it will be taking to “support the flow of credit to households and businesses” and to “support effective transmission of monetary policy to broader financial conditions.”

The measure announced: the central bank will be purchasing any value of securities — be that Treasuries, mortgage-backed securities (the securities that caused 2008’s Great Recession), corporate debt, municipal or state debt, etc. — to stabilize the economy. Many economists and analysts have dubbed this “QE Infinity,” a monetary measure that presumably would benefit assets, especially assets with a scarce supply such as gold and Bitcoin.

Analysts are starting to come to the consensus that Bitcoin is on a path higher.

This pattern is marked by a number of price trends: 1) a downtrend that leads into a massive, vertical sell-off; 2) a bottoming pattern that sees prices consolidate for as long as the aforementioned downtrend; 3) a rally past the downtrend line formed in 1); and 4) a throwback to the trendline before a surge higher that leaves the bottom far behind.

As it stands, Bitcoin is in the fourth phase, meaning it will continue to rally higher from here if it is the complete the entire pattern. 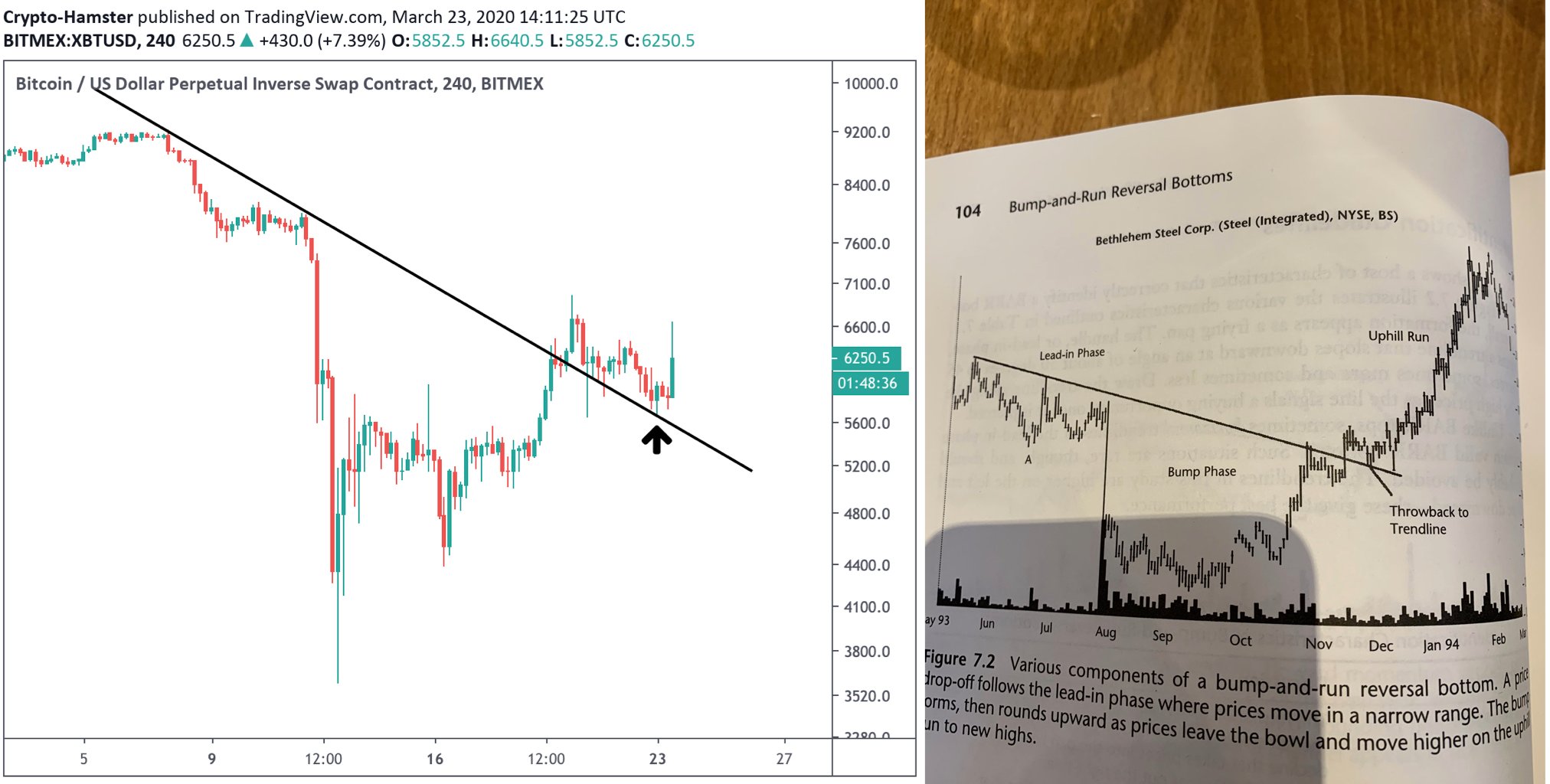 This pattern is especially notable as it is the one that marked the bottom in the previous bear market, the one that transpired over 2018 and early-2019; indeed, if you were to pull up a chart from November 2018 to May 2019, you would find that the price action matches the textbook schematic almost perfectly, with all phases included.

First Asset to Rally in a Recession Might Be Bitcoin

The fundamentals, too, are seemingly favoring the cryptocurrency’s growth.

Cryptocurrency analysts have stated that markets may be on the cusp of splitting into two types of assets: 1) Those that will be boosted by historic levels of monetary stimulus 2) and those that will continue to underperform, even in a world where central banks are printing trillions.

According to Willy Woo, a noted cryptocurrency analyst, Bitcoin and gold both fit into the first category, just as gold did during the last recession in 2008, as it bottomed months ahead of equities, seemingly surging on anticipation of monetary stimulus and the debasement of fiat.

Ari Paul, CIO of BlockTower Capital, corroborated this theory, writing in his own analysis on the matter that he is starting to become convinced that “BTC and gold [will] catch a sustainable bid even before equities start recovering.”

Until today, I was convinced we’d have to wait until at least a few months after equities bottomed for the fiat hedges (gold, BTC) to catch a strong bid in a sustained way. They’re still risk assets, but wall st is focused on inflation and depreciation 10x as much as 2009.

He attributed this thought to the aforementioned Federal Reserve news, which many think will shorten the timeline dramatically for inflation to take place, which, again, will favor assets that are scarce and can’t be inflated away.