From yesterday things haven’t changed much for the cryptocurrency market as the evaluation has been hovering around the same levels at around $130B mark. The evaluation is currently in a downward trajectory as it encountered resistance yesterday when it came up to $135B mark, but this might be only a small retracement due to the lack of determinative momentum.

On the global chart you can see that the evaluation has been going sideways for quite some time now, so a decisive move is getting close, but considering the market context it is still unclear whether the direction for the expected move would be up or down so we are going to wait and see, but as the market is still overruled by the bearish sentiment, for now, it looks like it is heading further down. 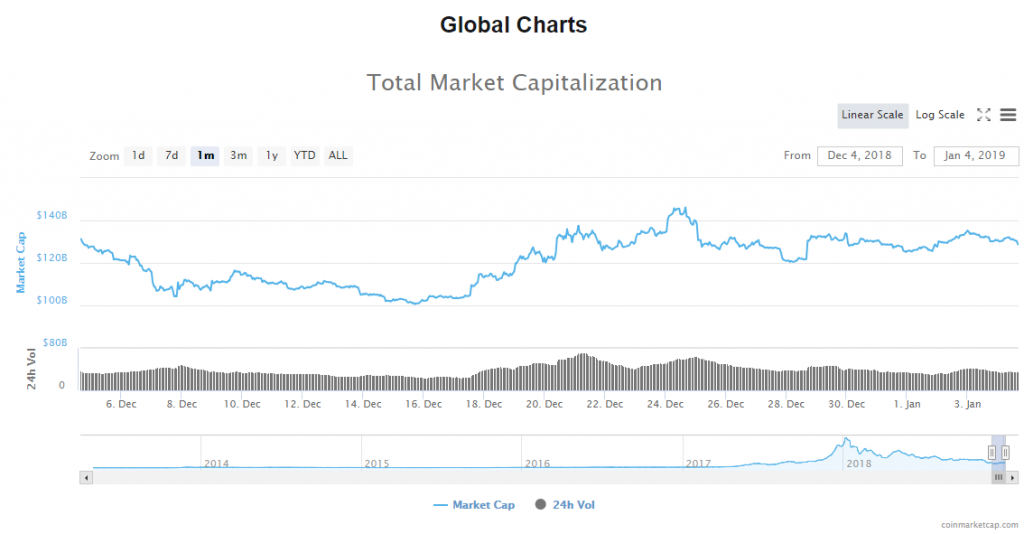 Today the market is in red with an average percentage of change among top 100 coins ranging from 1.32-3.38%. The biggest loser is Nexo with a decrease of 8.63 %, while Chainlink is the biggest gainer with an increase of 13.83% in the last 24 hours.

Bitcoin’s market dominance has been consequently increasing and is currently 51.3% as the confidence diminishes.

Looking at the hourly chart you can see that the price attempted to break the horizontal resistance at around $4030 the second time and it failed to do so, which is why we have seen another retracement. Currently, the price action has formed a higher low which paints a bullish picture but we are still yet to see if the current minor uptrend support line holds or not.

The RSI is on the lower border as it’s at 31.8% indicating that the price is getting close to the oversold conditions so the level might hold for now and judging by the wick from above buyers are pushing the price above it so we might see another minor increase from here and another interaction with the upper resistance before the price goes down again to the vicinity of the prior low where W wave ending point is around $3700.

According to my Elliott Wave count, this move is the correction from a when the price came up to the bold black line and interacted with it retesting it for resistance so a retracement was to be expected and as you can see the price quickly fell from $4367 to $3700. However, I don’t believe that the correction is over since we are seeing the current structure to be a corrective in nature as well so I would expect to see another decrease from here.

But the X wave doesn’t look over which is why we could potentially see another increase all the way up to the bold black line again before we see the expected decrease. However, I don’t believe that the price will go that far before another wave down as it failed to exceed the prior high level which indicates that the price is slowing momentum.

The most likely scenario would be in my mind that the price will go again to the vicinity of the prior high at around $4030 and will fail again to go past it which will serve as a sell signal for many and another decrease would start as the sellers are going to push the price lower because they have seen that the price isn’t going to be “better”.