Over the weekend the evaluation of the cryptocurrency market cap has increased from $129B at its lowest point on Friday to above the minor resistance line at around $135B.

Looking at the global chart you can see that the evaluation is back now on the mentioned resistance where it is retesting it from the upside for support. Consequently, the market is predominantly in green with an average percentage of change among top 100 coins in the last 24 hours ranging around 2.4%. The biggest gainer today is Buggyra Coin Zero which increased by 82% in the last 24 hours and has gained its place among top 100 coins. 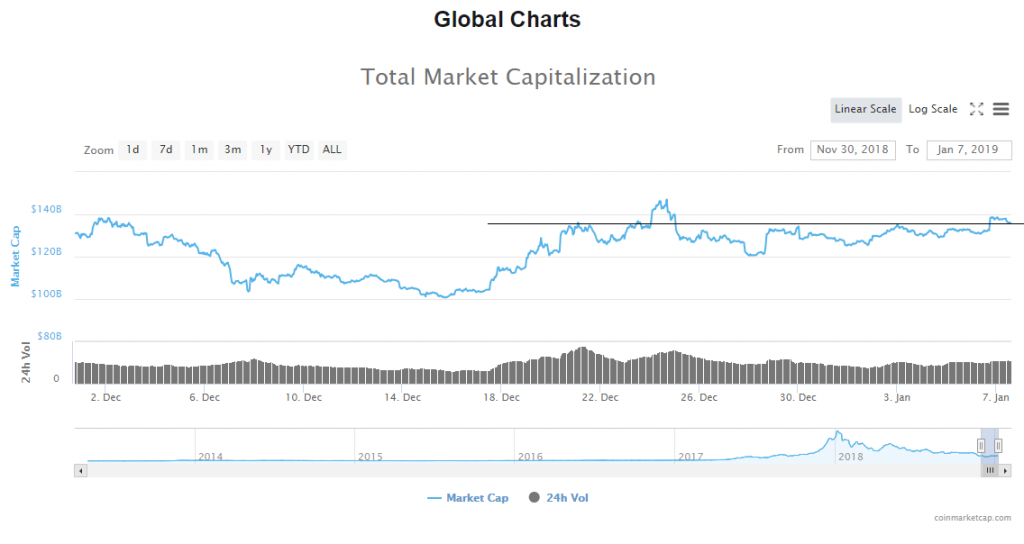 Bitcoin’s market dominance has been also increased over the weekend from 50.91 on Friday’s low at 51.8 where it is currently sitting. 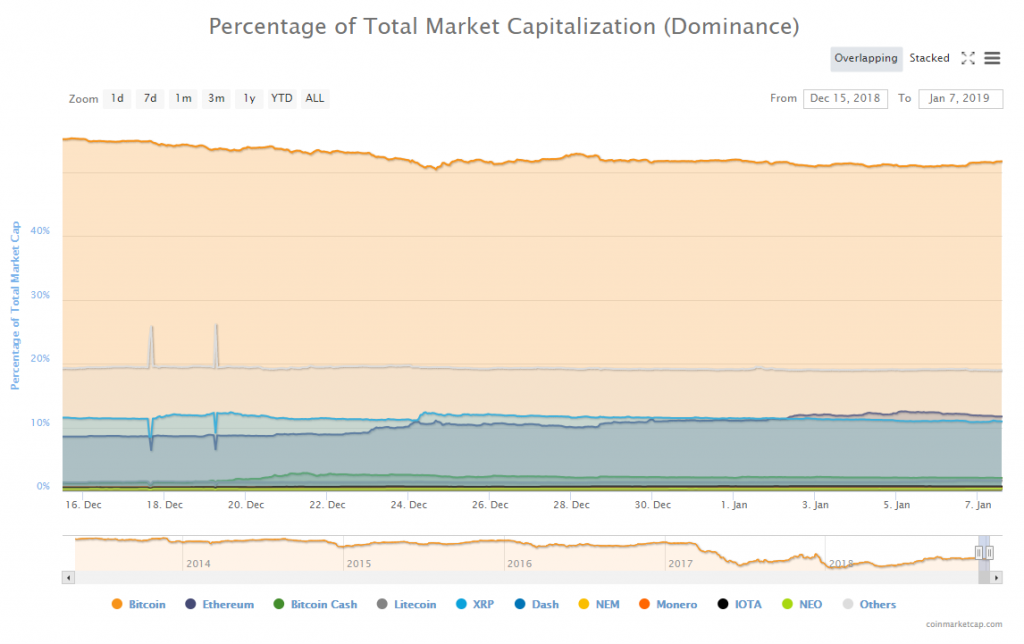 This is odd considering that Bitcoin’s dominance increases when the market confidence diminishes as market participants stack up Bitcoin, selling their alts in order to quickly sell Bitcoin if the market declines further.

From Friday’s low at $3877 the price of Bitcoin has increased to $4190 at its highest point today but has retraced since and is now sitting at $4106 which is an overall increase of 5.95%.

Looking at the hourly chart you can see that my primary count hasn’t changed as I believe that the price is currently in a corrective stage particularly in the X from the WXY that is likely occurring after a 34% move to the upside. The price is still lower than the ending of the 5th impulsive move when the price of Bitcoin reached $4274 making it a lower high, as it interacted with the minor resistance line (second purple line) and has quickly retraced back since.

Currently, the price is looking for support after a harsh rejection and judging by the long wick from the downside, buyers are present and are pushing the price above the $4075 level which is the minor significant horizontal level which was interacted with two previous times when the price came up to it and found resistance, and pulling back afterward. Having broken the mentioned resistance I was expecting an interaction with the bold black line which hasn’t happened as the price was stopped out at the next horizontal resistance, but now as the price is looking to establish support and it looks like the support is there we might see another increase and a proper interaction with the bold black line again.

After this move has ended I would be expecting another retracement but this one would be steeper as the Y wave would have to be approximately the same length as the W wave which if projected from the current price levels ends up with a target of $3540 and potentially lower to $3464.

Bitcoin is in the buy zone as indicated by the hourly chart technical indicators, but looking at the indicators closely you can see that it leaning on the buy side by a small percent as the oscillators are predominantly in the neutral zone.